Tottenham Hotspur's absymal performance in the north London derby has been well documented. Nuno Espirito Santo seemingly picked the same 4-3-3 that had pressed high and played well in the first 45 against Chelsea the previous weekend, in which Dele Alli and Tanguy Ndombele played between the lines to help Spurs progress aggressively through midfield. It was bizarre, then, to see Tottenham look to play a hopeless long-ball game at the Emirates.

Throughout the first 20 minutes Dele and Ndombele joined the forwards in a straight line of five up front, creating a 4-1-5 formation so that the defenders could simply hoof the ball up to them. It was a dreadful decision, because by emptying midfield Nuno ensured that the second ball would drop for an Arsenal player and begin a counter-attack. Martin Odegaard and Emile Smith Rowe easily dominated on the break, leading to two quickfire goals.

The backlash to this result has revealed the underlying anxieties at Tottenham; the distrust in Daniel Levy; and the growing sense that Spurs have hired the wrong manager. But what was most uncomfortable about this game was how wildly different Nuno's tactics were from the last Premier League game. It showed his confusion; his struggle to adapt to managing a big club as his usual defensive vision clashes with the demands of the role. 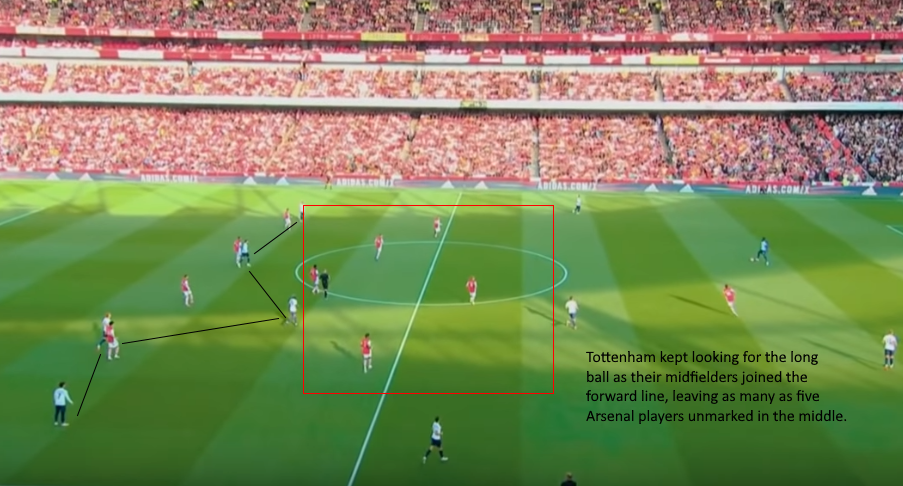 Arsenal were as brilliant as Spurs were dreadful. As discussed in this column last week, Mikel Arteta finally has tactically intelligent and technically accomplished players who can enact his complex, Guardiola-inspired instructions. Here was further evidence of the detail of Arteta's plans and how Arsenal can keep opponents guessing; after using a 4-3-3 last weekend, they lined up in a 4-2-3-1 that swung into a 3-4-3 when in possession.

Takehiro Tomiyasu became a third centre-back while Martin Odegaard – brilliant at connecting the lines centrally when a Spurs attack broke down – often moved out into a right wing-back position, collecting the ball on the outside of Tottenham's narrow defensive shell.

But the most important aspect of Arteta's approach was the pre-prepared plan to start with a high line and high press, before dropping deep after scoring the first goal. The Arsenal manager gambled that Spurs could be ruffled by a fast start (they were) and then would not have the guile in possession to break down a low block (they didn't).

Thomas Tuchel's decision to use a 3-5-2 made a lot of sense, on paper. This formation worked well to stem the tide in the second half against Spurs, whose adventurous 4-3-3 had been tearing them apart before N'Golo Kante came on to create a three-man midfield. Understandably, Tuchel thought this system would similarly stump Man City, who would push too high in pursuit of the opener and leave counter-attacking space for the speed of Timo Werner and Romelu Lukaku.

In hindsight it was an error, because those two strikers – both making runs on the shoulder, rather than dropping short – were completely disconnected from the Chelsea midfield line. That meant Tuchel's side could not pass out from their own third, either from their own build-up play or on the counter, as Man City's superb high press slowly suffocated them into submission.

Tuchel is usually very proactive with his changes, often making subs at half-time, but surprisingly he was too late to act on Saturday. He waited until the 60th minute to switch to a 3-4-3, adding bite to midfield and a pass between the lines, but by then Man City had already scored the winning goal. 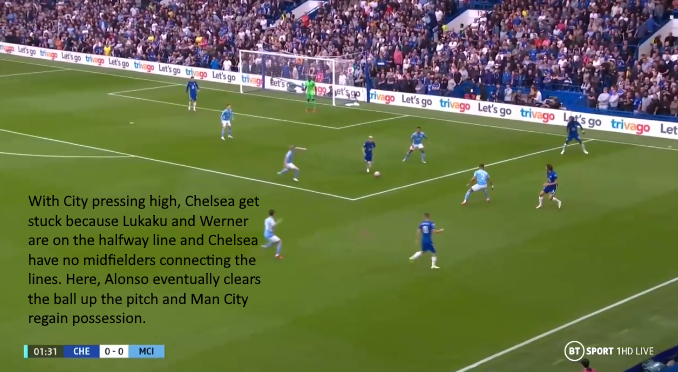 Aston Villa richly deserved their win at Old Trafford on Saturday afternoon in a match that, once again, revealed the absence of sophistication in the Ole Gunnar Solskjaer project. It cannot be long before it is more widely acknowledged that the Manchester United manager fails to coach to a modern standard of possessional structure. Eight games into the season, United have looked without a plan – a mere collection of individuals – in six of them.

The cohesion in Villa's approach at the weekend shone a light on what Solskjaer is missing. Dean Smith's side were superbly together at all times, compressing the space nicely and targeting their press in short bursts, with Matty Cash and Matt Targett bursting forward to take advantage of the poor defensive work of United's wide forwards. There have been times under Smith when the tactics have seemed somewhat vague, but his ability to hire staff and delegate has seen Villa continue to improve.

This Alex Ferguson-esque capacity to surround himself with the right people is most notable this season in the appointment of a new set-piece coach, Austin MacPhee. The club's interesting set-piece routines have already played a big hand in their good start, and it was another goal from a corner that gave Villa the three points on Saturday.

There wasn't too much of a tactical battle at Brentford, more a chaotic end-to-end encounter that showed the best of both teams' attacking talent. Thomas Frank successfully targeted the narrowness of Liverpool's 4-3-3 by instructing his wing-backs to push on at all times, and indeed Rico Henry and Sergi Canos caused havoc throughout the game.

The other reason for the high score was Brentford's commitment to attack. On almost every occasion they had four or five bodies in the box waiting for the wing-backs to create something, which meant Liverpool's defenders were often outnumbered – but also meant there was a lot of open grass for Jurgen Klopp's front three to counter-attack into.