Brendan Rodgers looks like he is beginning to lose his grip on the Leicester City team. They lined up in a 3-4-3 formation initially, sitting deep in the hope of absorbing pressure and then hitting long balls behind Chelsea's high line into Jamie Vardy. But the problem with the system was that Ademola Lookman and Harvey Barnes were too wide off the ball, meaning Vardy was all alone in trying to cut off passes through midfield.

Consequently Leicester's two-man midfield of Wilfried Ndidi and Boubakary Soumare had far too much to do up against Jorginho and N'Golo Kante, who ran the game in front of their counter-parts. Worse still, the Leicester pair didn't drop tight enough to the back three, meaning Chelsea's inside forwards had too much room in the number ten space, while Thomas Tuchel's inverted full-backs meant it was sometimes a six-on-two centrally.

Leicester were overwhelmed, but did briefly come back into the game when Rodgers changed to a 3-4-1-2 that allowed substitutes James Maddison and Kelechi Iheanacho to shut down the angles into midfield. Soumare started to man-mark Jorginho, too, although ultimately Chelsea had far too much quality; the new shape made Leicester too narrow, and that killer third goal was built through wide-open flanks as Trevoh Chalobah walked into the final third.

That is the problem with trying to counteract Chelsea: plug one gap and they find another way through.

The Antonio Conte era is up and running. The manner of Sunday's 2-1 win over Leeds United could not have been any better, given it gave a clear indication to the players that hard work, hard running, and listening to the manager's instructions will pay off. He needed that limp first half to inspire the second, and those furious celebrations at the final whistle will do a lot of good in the dressing room.

In the first period Leeds United were the stronger team as Spurs sat too deep, allowing the visitors to overwhelm them at times as Conte's team failed, once again, to take a shot on target. But a dramatic half-time tactical shift saw Spurs out-run their opponents by 3.5 km in the second period:

"The second half we have changed the plan tactically and we started to put pressure, to go in every area of the pitch to put pressure and we created great difficultly to Leeds," Conte said after the game. It was a strategy easy to spot, as Spurs pushed right up the pitch to confront their opponents, proving that a front-foot approach is the way forward for the club after the conservatism of the Nuno Espirito Santo and Jose Mourinho eras.

Arsenal are an emotionally volatile team who, through age and inexperience, tend to become fragile once things start going against them. Mikel Arteta will be disappointed with himself that his altercation with Jurgen Klopp in the first half was this week's trigger; the game felt flat until that moment sparked Anfield into life, favouring the hosts.

From this point onwards, Arsenal's decision to constantly play short passes out from defence proved very costly, bringing out a retro version of Liverpool – the heavy-metal one that we saw in those early Jurgen Klopp years when a high press caught teams by surprise. These days, the league has caught up with the innovation and nobody lets Liverpool do that to them, hence the madness of Arsenal continually trying to pass out under pressure.

Arteta's team are still on the up, a young team that will keep making mistakes but keep learning. As part of that process they will need to repeat a tactical battle-plan even when it seems foolish, as they did at Anfield. 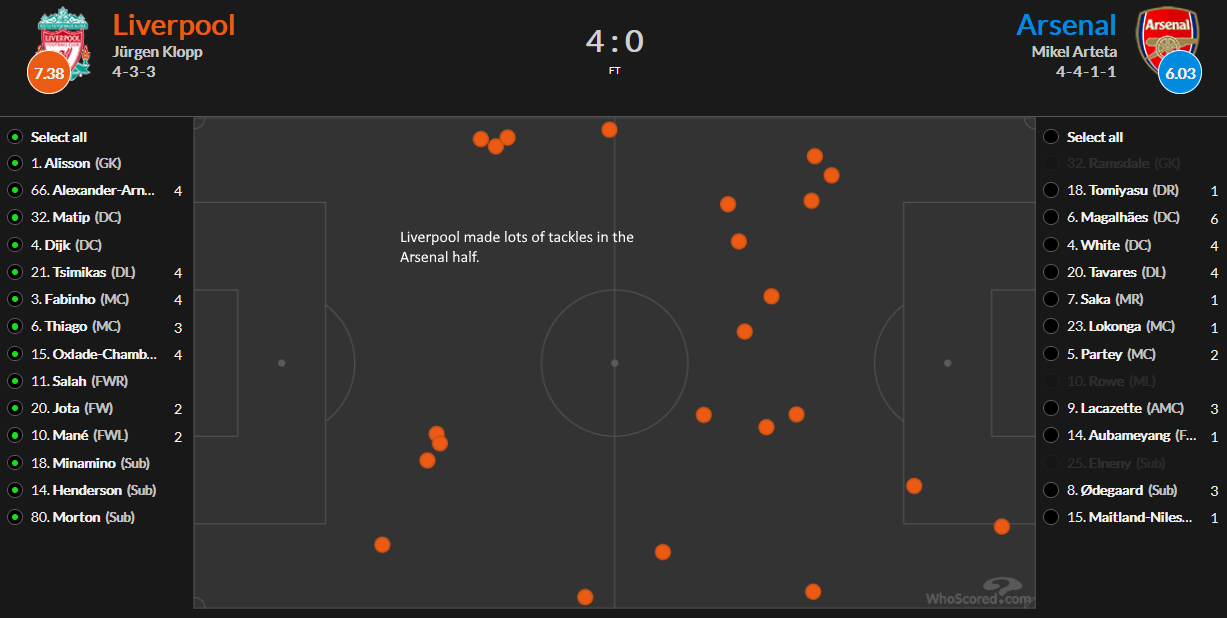 4) Gerrard's substitutions an upgrade on Smith

It wasn't the most convincing of performances from Aston Villa on Steven Gerrard's debut, which is to be expected; the tactical changes necessary won't click into place for some time. But it was an impressive win nevertheless, chiefly because Gerrard made some savvy substitutions, representing an early upgrade on his predecessor.

Dean Smith often acted too late and rarely seemed bold in his decisions, showing hesitancy and defensive caution late on in matches. By contrast, Gerrard acted swiftly, making the first change on 66 minutes by boldly bringing off Danny Ings for Leon Bailey. The added directness helped Villa push on, as did introducing an impressive Ashley Young in an attacking role and Anwar el Ghazi for Jacob Ramsey.

Three attacking substitutions that gave Villa greater directness on the counter-attack, something they were forced to do due to Brighton's possession dominance. It ws El Ghazi's run and Young's pass that made space for Ollie Watkins' opener, which Gerrard responded to by shouting at his players to push higher. It was brave management, and the new Villa boss was rewarded with a second goal.

Things have unravelled horribly over the last couple of months – but nobody should have been surprised by the way Ole Gunnar Solskjaer's tenure ended. He was never a tactician, rarely coaching his players and, according to reports, did little more than give the players simple instructions. He saw pressing as something players could work out on their own, by applying it to the nearest man. His tactics board was full of inspirational messages.

There was never a vision beyond vague notions of following the 'United Way', and it is telling that in one interview Solskjaer revealed he had learnt a lot from playing Football Manager. Frankly, it is simply friends in the media – coupled with a board that really don't understand football – that kept him in this job for so long. Anyone paying attention could see, within months of his appointment, that Solskjaer was not coaching to anything near the required standards.