German football's welcome influence was on show at Wembley, Jesse Marsch could make it work at Leeds and Newcastle's revival is coming from the wings. Here's five lessons we were learned from the Premier League weekend:

1) Tottenham dominance points to what Marsch must do

It was clear from Tottenham's easy destruction of Leeds United on Saturday lunchtime that we were reaching the end of the Marcelo Bielsa era. All the usual hallmarks were there: fitness issues, chaotic defending, and a sense that the high-risk strategy no longer made sense to the players. Bielsa has been hurt badly by injuries to Liam Cooper, Kalvin Phillips, and Patrick Bamford, but slowly – as confidence drained – the rest of the team started to underperform.

The problem with such a complex system, built on constant hard pressing and a unique man-to-man press, is that only a slight decrease in energy levels sees the house of cards collapse. It cannot be sustained at half-pace and as soon as the players stop believing fully in themselves – or in the worth of those tiring third-man runs and the value of always pressing high – then the lines become decompressed and spaces open up everywhere.

The first two Spurs goals were the result of half the players pressing and the other half nervously holding their shape, leading to a disjointedness that Antonio Conte's players enjoyed cutting through. It was an unsustainable position for Leeds to be in.

Incoming Jesse Marsch is an astute appointment, however. The American will move to a more 'normal' pressing system and show greater pragmatism than his predecessor, sticking to the same basic philosophy as Bielsa but dialling it down a bit. That is exactly what Leeds need.

2) Villa allowed to regroup thanks to Brighton's possession

Steven Gerrard collected his first three points in over a month, and while Aston Villa were somewhat improved in their overall performance they can mostly thank Brighton's recent wobble. More specifically, the way Graham Potter likes to dominate possession with patient football that focuses on retaining structure gave Villa the chance to reset themselves.

Villa held just 35% possession, their lowest tally since an unfortunate 2-1 defeat to Manchester City and the same amount of possession as in the earlier 2-0 win against Brighton. Looking at the data from Gerrard's time in charge, Villa have performed a lot better when holding less of the ball; they have won 19 points from 10 games in which they have held the minority of possession, and one point from four games in which they have held the majority.

Before the win on Saturday Villa had been forced to hold a high 58% in defeats to Newcastle and Watford: clearly they are better when made to sit back a bit, staying in a more compressed midfield shape and then breaking quickly through the two tens. Gerrard would probably paint himself as a possession-based manager, but so far in the Premier League he has found it easier when Villa are made to be a bit more secure. 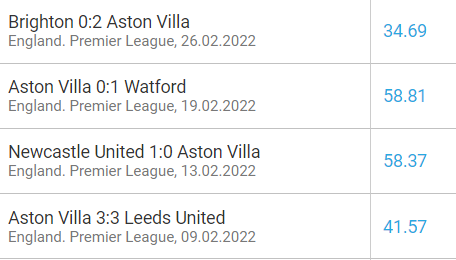 Thomas Frank made the mistake of abandoning his usual 3-5-2 for a 4-3-3 on Saturday, a mistake that was compounded by the early red card for Josh Dasilva in the 11th minute. From here on in they deployed a 4-3-2 and tried to contain Newcastle by dropping into an ultra-defensive formation, staying very narrow in the process. That was Frank's second mistake.

Eddie Howe's team easily exploited this narrowness by repeatedly attacking down the wings, using Jonjoe Shelvey's passing range to find the full-backs Matt Targett and Emil Krafth in acres of space. Newcastle attempted 28 crosses, their joint highest tally in the Premier League this season, and eventually one of them told as Ryan Fraser crossed for Joelinton to score the opener.

Howe deserves a lot of credit for the turnaround at Newcastle, and it is very encouraging for supporters that his team have shown they can win on the break and can win when dominating - as they did here with 63% possession.

Over his first few games in charge Frank Lampard had been using a two-man midfield and, more often than not, it meant Everton were overwhelmed centrally. But he finally switched to a three on Saturday for the visit of Manchester City, which was undoubtedly the best performance of his tenure to date. Only an astonishingly poor refereeing decision denied them a penalty and the chance to take a point.

The biggest factor was an outstanding performance from Abdoulaye Doucoure, returning from injury to command central midfield with an excellent display on and off the ball. Only Mason Holgate took more touches for Everton than Doucoure's 54, and the midfielder's support of Seamus Coleman on the right was crucial in keeping Joao Cancelo quiet. 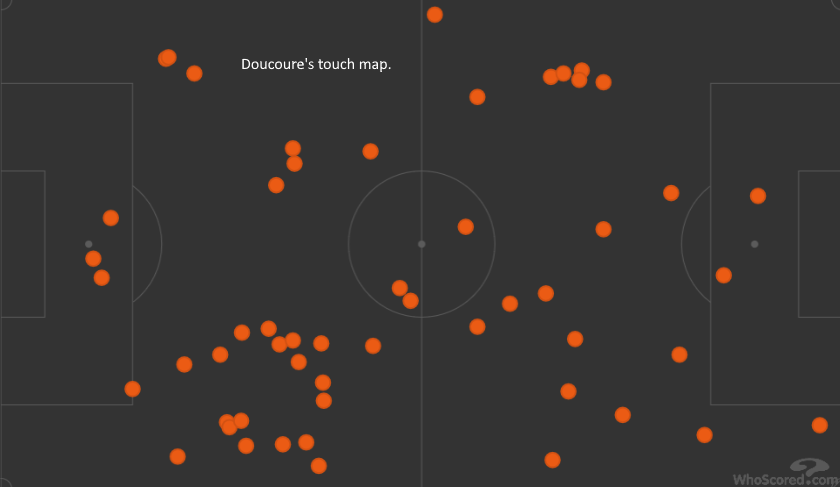 This was one of the all-time great 0-0s, and evidence that goals really aren't everything in football. It was also evidence that we are lucky the Germanic method of high pressing and focus on the transitions – attacking vertically as soon as the ball turns over – has taken over the English game. It has created a situation in which managers like Thomas Tuchel and Jurgen Klopp are constantly moving the play from one end to the other.

Chelsea were particularly good in the transitions because of the brilliant weaving runs of N'Golo Kante, coupled with the intelligent movement from Kai Havertz and Christian Pulisic – two players educated in Germany. Tuchel's side were worse after Romelu Lukaku came on, suggesting once again that he may simply be unsuited to the tactics or formation deployed by the Chelsea manager.