For the first 20 minutes of this game, Manchester United had a plan to cope with Southampton and it worked well. Ralf Rangnick clearly anticipated Ralph Hasenhuttl's high defensive line and the compactness of his off-the-ball shape, which tends to surround the deepest opposition midfielders to prevent them from playing through the lines.

To combat this, Rangnick deployed Paul Pogba and Bruno Fernandes together as dual eights in front of Scott McTominay and both players dropped wider than usual to leave that crowded central area. United also played lots of passes out wide, before dropping direct passes over the top of the high line to set Marcus Rashford and Jadon Sancho away down the wings.

These counter-attacks were fruitful in the first half, allowing United to record their highest xG of the season (2.99 per understat.com) and leading directly to their opening goal.

Part of the reason counters down the wings worked so well was because Hasenhuttl's 4-2-2-2 sees the wide players come very narrow, leaving that space for Rashford and Sancho. But once Southampton got a foothold in the game it was this very tactical element that saw them get the better of the hosts.

United's players appear to simply not be listening to their manager's instructions. There is no other justification for why their defensive and midfield lines lacked aggression, dropping off rather than pressing to create a limp performance and an elongated, decompressed shape. Rangnick, as one of the godfathers of gegenpressing, surely does not ask team to be so deep and, once again, it meant United's opponents could build momentum and come back from behind.

More specifically here, Mohamed Elyounoussi drifted into the number ten position repeatedly, providing his team-mates with a vertical pass into a dangerous area of the pitch. Since United had left such huge spaces between the lines, and with Pogba high alongside Fernandes, McTominay had too much ground to cover to notice Elyounoussi ghosting into the middle. This exact move caused the equaliser, having already led to several chances in the first half.

A man-of-the-match performance from new loan signing Donny van der Beek was the defining feature of Everton's 3-0 victory over Leeds United, a game that saw the Frank Lampard era explode into life. They played with a front-foot aggression and determined commitment to attacking football that reflects the wishes of their new manager.

There is a notable caveat here that Leeds are arguably the perfect opponents for this. Marcelo Bielsa's desire to surge forward in high numbers and press in a very risky manner gave Everton the game they wanted and, without Patrick Bamford or Kalvin Philips, Bielsa's side lacked the composure required to get to grips with such a feisty game.

Van der Beek controlled things with some excellent passing from central midfield, spraying the ball around neatly under pressure to help Everton evade the Leeds press and push forward. He made the most tackles (four) and passes (38) in the Everton team, while Lampard's side had more than 20 shots on goal for the first time since 2013.

"Donny linked the play and gave us a sense of confidence on the ball," Lampard said of his new signing after the game. "That's exactly what I brought him here to do." 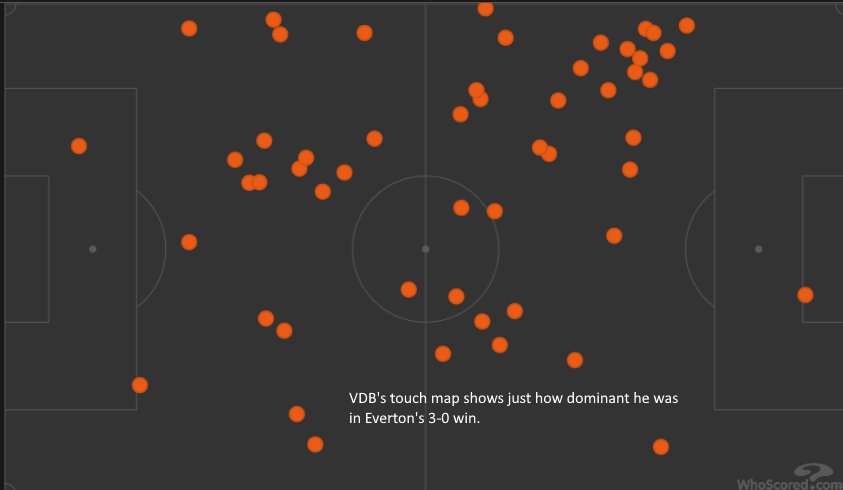 Tottenham ultimately played quite well against Wolverhampton Wanderers for long periods, some neat patterns creating decent goalscoring opportunities against the second-best defence in the Premier League. The problem, of course, was that Spurs conceded two goals from awful defending before they had really got going.

Antonio Conte looked drained on the touchline. Clearly he does not rate many of these players, as was made obvious by a damning substitution in the 28th minute of Ryan Sessegnon for Dejan Kulusevski – and an accompanying switch to a 4-2-3-1 formation. Tottenham had more clarity in this formation as Kulusevski linked the lines as a traditional ten, bringing Heung-Min Son and Lucas Moura into the game while providing a progressive pass for Harry Winks and Rodrigo Bentancur.

The switch may remain for the foreseeable. Conte's lack of pressing compared to most modern managers, and the accompanying midblock, is preventing Spurs from asserting pressure and means they can struggle to pass the ball into the final third. Adding a third midfielder, ahead of the other two, connected the lines much better.

Leicester City looked on course for a hugely important three points before two substitutions put Brendan Rodgers back under pressure.

First, David Moyes brought on Said Benrahma and his trickery from the number ten position started to make things happen, forcing Leicester a little deeper; he managed three shots, the joint most of any player in the game, despite only being on the field for ten minutes. The last one forced the corner for the goal.

But the second substitution was just as important. With one minute of normal time remaining Rodgers sewed doubt by bringing on Jannick Vestergaard for Youri Tielemans and switching from 4-3-3- to 5-4-1. Not only did that make Leicester sink a little deeper, inviting the pressure from Benrahma, it also meant taking a body out of central midfield – therefore helping West Ham's number ten find space.