Chelsea exploited West Ham United's defence to take an edge in a top-four race and Kelechi Iheanacho scored once again to save Leicester City. Here are five tactical lessons we noticed from the weekend games...

Jurgen Klopp's switch to a 4-2-4 formation appeared to be a fruitful one, with Liverpool creating more chances on Saturday than in their 7-0 win over Crystal Palace earlier in the season. With Diogo Jota and Roberto Firmino together up front, Liverpool had two number nines equally adept at dropping off the front line and hurting Newcastle in the number ten space.

Steve Bruce's side couldn't get enough bodies around them, and with Mohamed Salah and Sadio Mane holding the width it meant Liverpool had multiple options in that crucial number ten space. Newcastle's 5-4-1, with just two central midfielders, quickly looked like the wrong formation for the game as Firmino and Jota helped overwhelm the visitors through the middle. Both players were frequently picked out by Thiago's clever vertical passes through the lines – and this one looked done and dusted.

But Klopp took Thiago off in the 77th minute and suddenly Newcastle were allowed back into the game. In fact, throughout the contest Liverpool's 4-2-4 seemed too light in the defensive midfield zone, hence Allan Saint-Maximin's ability to dominate in this area and get Newcastle forward on the counter-attack, but surprisingly things got much worse when Klopp moved to a 4-3-3. Without Thiago's controlling influence, Newcastle began to put pressure on Alisson Becker's goal. 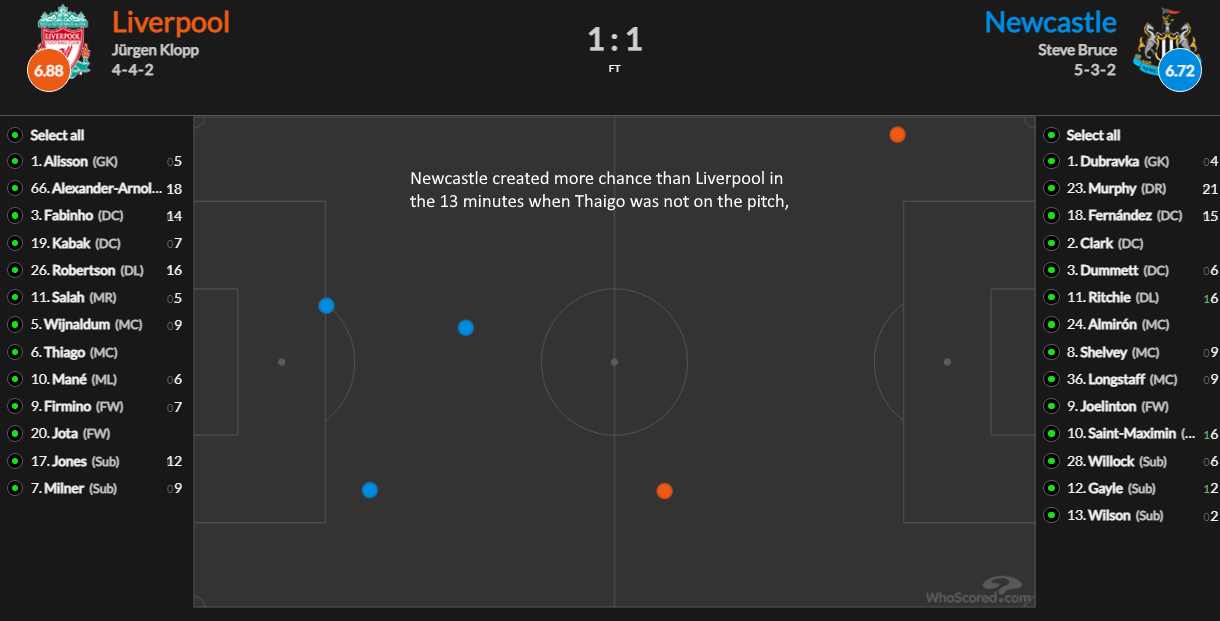 Those final 15 minutes provided evidence that Newcastle could have been more effective with a bolder approach. Bruce's side did not play particularly poorly and can be forgiven for not expecting Liverpool to play a 4-2-4, but Joelinton's substitution for Callum Wilson late on showed that the manager had made an initial mistake with his team selection.

Time and time again this season Liverpool have struggled to defend long balls in behind their centre-backs, a clear weak spot in the team while Virgil van Dijk and Joe Gomez are out injured. With the full-backs going forward and Klopp persisting with a high defensive line, it is easy for opponents to counter-attack in the spaces behind the defence. This is what Newcastle did late on as Callum Wilson repeatedly made runs on the shoulder of the last defender.

It dragged Liverpool backwards and created nervousness, directly leading to Newcastle's equaliser. Considering how poor Joelinton was throughout, it was clear Bruce should have started the game with Wilson alongside Saint-Maximin.

This match went entirely as expected. West Ham are very good at sitting in a midblock and refusing to engage the opponent until they enter the final third, while Chelsea have been playing conservative possession football that does not take risks – in the number of bodies forward or in pass selection. Unsurprisingly, we got a dull game with few chances for either side.

But the match ultimately hinged on one piece of bad defending from the hosts. David Moyes is often wrongly labelled as a defensive coach who holds a deep defensive line, when in fact West Ham make sure they are relatively high in order to prevent the opponent from pinning them back. Inevitably this requires bravery when playing a team as good as Chelsea, and in the 43rd minute – as legs tired before the break – West Ham lacked courage for one brief moment.

The defensive line dropped a good 15 yards, an unexpected decision that was not followed by the midfielders, who continued to hold their nerve. This created an open patch of grass in which Timo Werner could drop, turn, and get Chelsea through the lines to score. They might have hung on until near the end, but Tottenham Hotspur were demolished by Manchester City in the League Cup final. It was so one-sided that it is difficult to know whether Ryan Mason deliberately played a Mourinho-esque low block or whether his team were simply pinned back, conceding 62% possession and amassing two shots compared to City's 21.

The game highlighted the deep tactical and psychological problems that Spurs are faced with. They were passive when City had the ball, an issue that has been present since before Jose Mourinho was appointed, suggesting they are playing with fear – hence an inability to show any sharpness in the challenge. Worse still, the game was riddled with minor positional errors and a couple of major ones ahead of the goal.

First was a needless concession of a freekick near the corner flag, with Man City going nowhere. Then came Moussa Sissoko's meek attempt at challenging Aymeric Laporte from the subsequent ball into the box. Spurs have a mountain to climb.

Kelechi Iheanacho is in incredible form. He has 21 goals/assists in 22 starts this season, at a rate of one every 70.5 minutes, proving that he just needed a run of games to show his worth after a career that has so far been played mostly from the bench. His goalscoring touch is clearly important, as is his excellent capacity to make runs in behind (leading directly to both Leicester goals against Crystal Palace), but more impressive from a tactical perspective is his movement as a false nine.

Iheanacho is increasingly coming short to affect the play, dropping between the opposition defensive and midfield lines to collect the ball and cause problems. The Palace centre-backs were regularly caught tracking him too closely, in turn creating space for Jamie Vardy's runs, and with Iheanacho equally adept at running in behind this makes the Nigerian an unpredictable entity for opponents.

Vardy looks like he is permanently slowing down. Fortunately for Leicester, they already have his replacement. 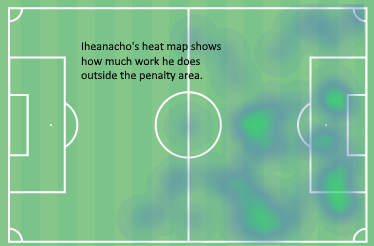