Jurgen Klopp was caught out by Tottenham, Manchester United were bereft of tactical ideas and Frank Lampard has found a system for Everton's survival. Here's five lessons we learned from the Premier League weekend...

It's very difficult to offer detailed analysis of exactly what Manchester United are doing wrong in games like these, because the performances are so dreadful they are devoid of any real tactical notation. Ralf Rangnick's team were lazy and disorganised, meandering around the pitch without any semblance of a strategy. Erik ten Hag is going to need a lot of patience over the next couple of years.

Brighton's 4-0 win was built on a hybrid formation in which their 3-5-2 morphed when left centre-back Marc Cucurella overlapped as left wing-back Leandro Trossard dipped into central areas. This little shift, typical of the moves Graham Potter makes to get an advantage, was enough to send these United players into a confused mess. Brighton were as complex and shape-shifting as the visitors were simplistic and static.

Three of Brighton's goals were built down that side of the pitch as Trossard and Cucurella overwhelmed Diogo Dalot and Anthony Elanga, the latter struggling to get back into defensive positions as Brighton broke quickly. 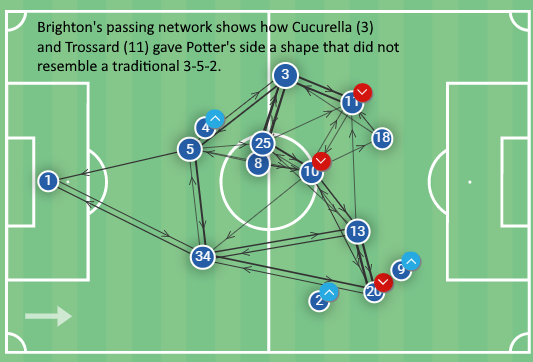 There were high hopes among Liverpool supporters that Newcastle United could take at least a point at the Etihad but from the first minute on Sunday it was obvious Manchester City would run out easy winners. Their 5-0 win has swung goal difference and goals scored in their favour, meaning Pep Guardiola's side could lose one of their final three matches and still win the title. It was a decisive day in the title race.

It had been anticipated that Newcastle would hold a very clear line in their own half and sit patiently behind the ball, avoiding dropping onto the edge of their own box but nevertheless keeping things tight with aggression in the challenge only once Man City entered the final third. Instead, Eddie Howe's side were strangely open, as if caught in two minds as they looked to push onto Man City.

It left them very decompressed between the lines, allowing Kevin de Bruyne to dribble through the middle of the pitch. Rarely are Man City given quite so much room to play in the spaces between the opposition lines of defence and attack. It was more like the final days of Steve Bruce, when Newcastle were trying to play attacking football, than the diligence through midfield we had been seeing under Howe.

3) Liverpool too narrow even after substitutions

Antonio Conte is very good at negating opposition teams as strong as Liverpool and this was always going to be a tough game. As expected, Tottenham Hotspur had a defensive attitude, happy to sit behind the ball and crowd the centre of the pitch before breaking quickly through Harry Kane –who was superb dropping off the front line to help Spurs transition into Liverpool's third.

But Jurgen Klopp should take the blame for Liverpool dropping points. He did not seem to adapt his approach to account for Spurs playing so narrowly, and as Trent Alexander-Arnold and Andrew Robertson came into the half-spaces, Tottenham were able to stay narrow themselves and block all the spaces. Even after a double substitution, Liverpool had this problem as Mohamed Salah and Luis Diaz received little support out wide in the new 4-2-4 formation.

Diogo Jota and Sadio Mane were isolated as a front two, with Alexander-Arnold still playing too narrowly and offering Salah no option to help him create space on the flanks. Spurs' 5-3-2 can be light out wide as the wing-backs are expected to work alone here, but Liverpool did not even try to get two-on-ones in these areas as a route to goal. 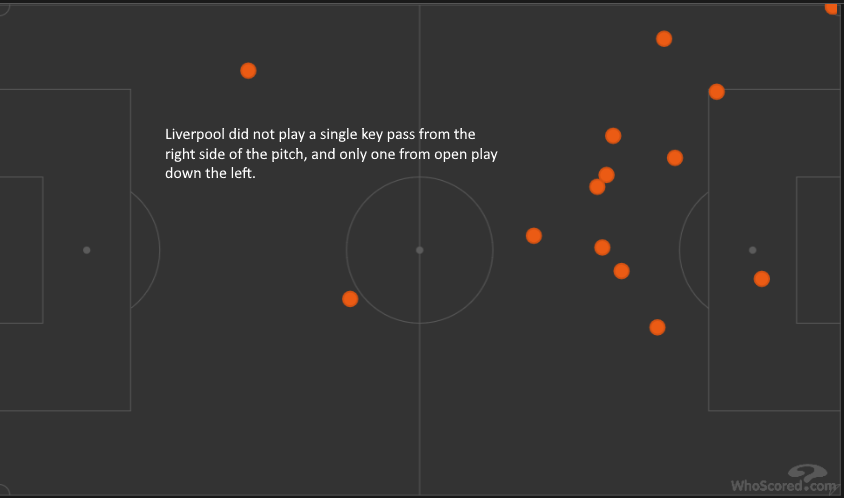 4) Lampard has found the system for survival

Back-to-back wins for Everton has put them in a very strong position to avoid relegation, and for that Frank Lampard deserves praise, having found a 3-5-2 formation with a reactive slant that is working very well. Everton are embracing their new identity as a counter-attacking team, pressing less manically and holding a deeper line as they invited Leicester City to come onto them.

From here, they then looked to counter-attack quickly, while Lampard has come up with a surprising solution to their creativity issues on the break; his redeployment of Alex Iowbi as a right wing-back has been highly successful in their last two games. He assisted the opener with a cross from the right, setting up the left wing-back Vitalii Mykolenko.

Defensive balance has been found by picking Seamus Coleman as the right-sided centre-back, which means he can drift across to cover when Iwobi gets forward, creating a hybrid formation that speaks to a new tactical maturity in Lampard.

5) Burnley have no plan for midfield overload

Having won ten points from his first four matches in charge, Michael Jackson must have though management was a lot easier than it looked – which might explain why he had no specific plan for the unique challenges of Steven Gerrard's diamond 4-4-2. Jackson continued with the same line-up and same 4-4-2, even though this meant he only had two players – Jack Cork and Josh Brownhill – to cope with Villa's overload through the centre.

Emiliano Buendia was dominant as a free-roaming ten, finding space behind Cork and Brownhill, who had too much to do attempting to track Douglas Luiz and John McGinn. Buendia found space to slip in Danny Ings for the first goal and then arrived late in the penalty area to score the crucial second. Jackson will need a new strategy for the reverse fixture next week, or else Burnley may find themselves back in the bottom three on the final day.