The tactical system just isn't working. There can be no other conclusion to yet another match under Ralf Rangnick in which United lacked creativity. His 4-2-2-2 formation is designed for counter-attacking football, for high pressing matched with bursting foward in vertical lines in the transition – or in other words, for the Germanic tactical philosophy Rangnick has helped invent.

But as Jurgen Klopp quickly found out and Thomas Tuchel is still struggling with (hence their creative difficulties recently), this needs adapting for the Premier League and, more fundamentally, cannot work when your team is expected to dominate possession. It is a formation and style that needs tweaking in order to allow for United to build gradually through the lines and maintain discipline against the counter.

When United had the ball at the back, Scott McTominay and Nemanja Matic had to come short and wide to get away from Wolves' narrow 3-4-2-1 containing shape. That meant, with the four forwards high, United basically had a circle formation, emptying central midfield. All they could do was shift the ball down the flanks and hope to cut a pass back inside once in the final third, something only achieved a handful of times.

The 4-2-2-2 was just as bad from a defensive standpoint. Since it creates squares, not triangles, the formation leaves huge holes in the middle; Wolves' inside forwards only had to dribble diagonally from the flank to burst clean through. Worse still, with McTominay and Matic occupied by Joao Moutinho and Ruben Neves, there was simply nobody left to track Daniel Podence and Francisco Trincao, allowing them to dominate in the half-spaces.

The topper: United don't seem capable of pressing at all, which is clearly the most essential aspect of the Rangnick model. 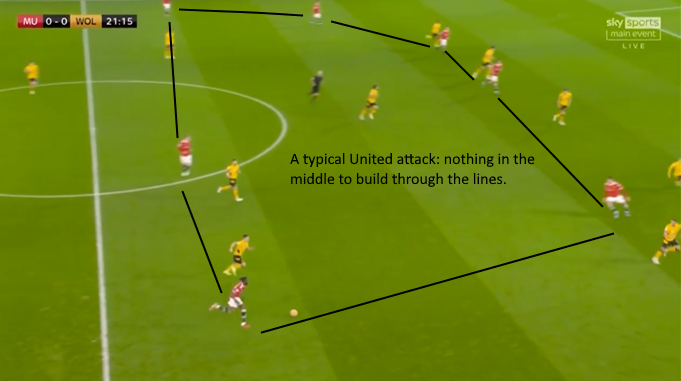 Liverpool have returned to the disorder of the early days of Jurgen Klopp, mostly because they badly miss the controlling influence of Georginio Wijnaldum and his replacement Thiago Alcantara is frequently out injured. At Chelsea, James Milner and Jordan Henderson could not keep the ball under pressure and were often dragged out wide, creating huge gaps in the middle that caused the end-to-end game we witnessed.

But while Jurgen Klopp should have played Naby Keita ahead of Milner, it was not entirely Liverpool's fault; their high defensive line allowed Thomas Tuchel to play in his favoured of rapid through balls played urgently in behind. Chelsea pummelled Liverpool again and again, embracing the carnage as Tuchel screamed instructions to pierce the defensive line. It led directly to the two Chelsea goals.

If either club is to challenge Manchester City next season, they need to ensure games as entertaining as this one happen less frequently. Liverpool must restore order in the middle of the park, while Chelsea must find a way of playing at lower tempo under Tuchel.

Man City were fortunate that Arsenal imploded in the second half, mistakes from Granit Xhaka and Gabriel undermining what had been a sensational performance at the Emirates. Mikel Arteta decided to take the game to City - setting a confrontational template that others could follow – by using Pep Guardiola's adventurous formation against him.

Arsenal pressed high and collectively, pinning City and overwhelming them in central midfield, where Rodri was alone to fend against the dominant Martin Odegaard and Thomas Partey; by packing this area with bodies, Arsenal exposed the way City deploy Kevin de Bruyne and Bernardo Silva higher up the pitch than Rodri.

From this position of dominance, Arsenal consistently spread the ball quickly out to Gabriel Martinelli on the left, targeting that flank because Joao Cancelo tends to burst forward and Riyad Mahrez doesn't track back. 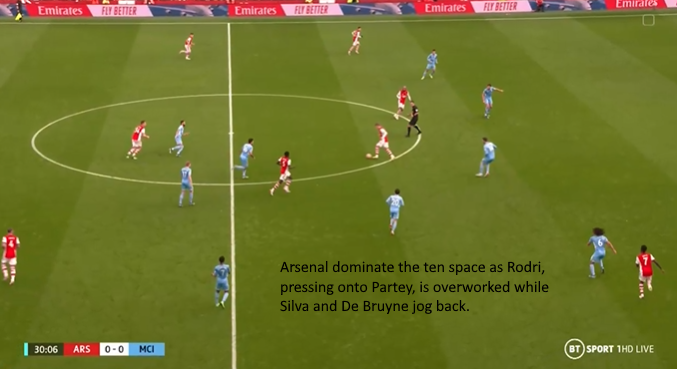 Watford did not do an awful lot in this game and yet they will feel aggrieved to have failed to win a point. Claudio Ranieri went all out defensive with a 4-4-2 formation that sat so deep his team could barely get out of their own half, Emmanuel Dennis and Josh King finding themselves isolated and outnumbered whenever the ball was cleared towards them.

But it almost worked. Ranieri instructed Juraj Kucka to play as an auxilary right-back in order to track Sergio Reguilon, while the deep and narrow Watford shape ensured there was no space centrally for inside forwards Heung-Min Son and Lucas Moura. Consequently Spurs were slowed right down and encouraged, by Watford's design, to switch the ball out to the free Emerson Royal.

Watford knew Emerson wasn't going to cause damage. His crosses are poor, with only five of his 14 attempted on Saturday finding their target. Antonio Conte's wing-backs are vital in providing penetrative width in a system that is otherwise too narrow; he needs a new right wing-back for Spurs to start firing.

Steven Gerrard was unhappy with the energy levels and attitude of his Aston Villa players on Sunday afternoon, and it is days like these that will ultimately help the club in the long run. Under the previous manager Dean Smith, this sort of off day was largely tolerated. It will have come as a shock to the Villa players to be criticised openly for failing to give everything.

The biggest issue, tactically, was the hole in central midfield that can develop when there is no defensive midfielder on the pitch. With Marvelous Nakamba out until April, Villa need to sign one this window, because at the weekend both Brentford goals came from simple passes into a wide-open defensive midfield zone.