The main lesson we have learnt from the festive period is that Manchester United are unlikely to keep Ralf Rangnick in charge beyond the summer. That is not because he has done badly, but rather because the painful stuttering through these early matches shows it will take a very long time for his tactical ideas to be absorbed by a team that started from such a low ebb – and with so little time on the training field in this extra-congested season.

The 1-1 draw with Newcastle United was the worst example yet. After three years of virtually no tactical work under Ole Gunnar Solskjaer, the players aren't fit enough or intellectually ready to implement Rangnick's high-pressing approach with much conviction. But worse than that is United's lack of creativity, with just a single goal scored against each of Newcastle, Norwich, and Crystal Palace. Clearly thr 4-2-2-2 doesn't quite work.

Bruno Fernandes is shunted into an awkward position, as is Cristiano Ronaldo, who doesn't appear in dangerous areas in the box often enough. But more fundamentally, Man Utd don't seem to be able to build attacks quickly through the lines, the box-shape midfield creating unfamiliar passing angles. Rangnick needs results if United are to climb into the top four, and that might mean switching to something a bit simpler to grasp.

Tiredness was perhaps the biggest factor behind Liverpool's second defeat of the season, along with the simple fact of missing a penalty and Sadio Mane blazing a one-on-one over the bar. Had either of these chances gone in, Liverpool would surely have won. Instead, with Manchester City on a nine-game winning streak, the slightest stumble is enough to put their title challenge under threat.

Leicester City were worthy of the three points, and while focus has rightly been put on Brendan Rodgers' inspired substitutions – with the energetic Ademola Lookman scoring the winner – the pattern of the patch was defined by an unexpected diamond 4-4-2. Reacting to a hugely depleted squad, Rodgers stumbled upon the perfect system.

Hamza Choudhury and Kiernan Dewsbury-Hall worked hard to cover the wide areas but they didn't need to do so very often, because Leicester were happy to leave the flanks open for the Liverpool full-backs – safe in the knowledge they had the numbers in the box to clear any crosses. Jurgen Klopp's narrow system was simply drowned out by the tight throng of four midfielders in front of an ultra-narrow defence, and the Liverpool manager seemed incapable of changing things to make his team less predictable. 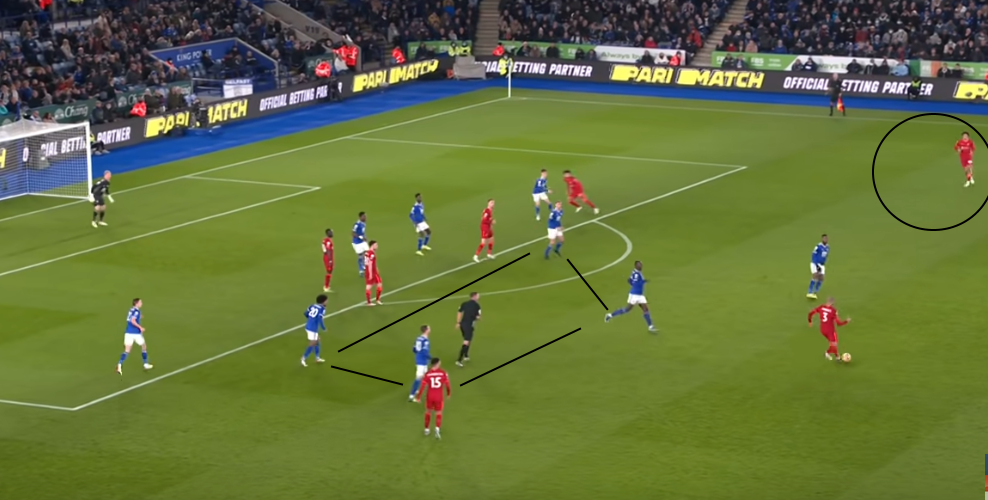 Chelsea have been stale for some time now, their passing too slow and their movement too rigid as they get stuck in Thomas Tuchel's overly-regimented 3-4-2-1 formation. This is not new, and indeed the problem is only getting worse as opposition managers learn how to sit a bit deeper and shut down the half-spaces where the inside forwards and wing-backs operate. What was so strange about the 1-1 draw with Brighton was that Tuchel seemed to ignore his own solution – found two days earlier.

In the 3-1 victory over Aston Villa the match was turned on its head when Romelu Lukaku came on at half-time and Tuchel switched to a 4-2-3-1 formation. With an extra attacking body on the pitch the hosts were unable to cope, and yet against Brighton on Wednesday evening Tuchel went right back to a restrictive 3-4-2-1.

He needs to change permanently to a more adventurous formation in order to unlock more of the creativity in this Chelsea squad, because you simply cannot play rapidly vertical Bundesliga-style football in the Premier League. Chelsea's possession dominance requires higher numbers in the final third.

Putting aside the disappointment of failing to grab a winner against Southampton, an issue largely of fatigue, Tottenham Hotspur are making clear progress under Antonio Conte. In a 3-4-3 formation they already look like an Antonio Conte team, passing sharply through the lines and looking to get the ball urgently into the final third; progressive passes attempted have gone up from 57.4 to 76.0 per match, according to WyScout, while their xG is up from 1.2 to 2.2 per match in the Premier League.

A notable feature is Eric Dier stepping out of defence to break the lines and to play long balls forward, either over the top of the opposition back line or out into the advancing wing-backs. This directness makes Spurs creative and exciting to watch, and is complimented by the brilliant dribbling of Lucas Moura and Heung-Min Son in the number ten space. As dual inside forwards, they are exchanging passes to make Tottenham into a ruthless counter-attacking team.

Work is still needed to be done in the wing-back areas, which explains what went wrong against Saints. By the end of the game, Conte had Bryan Gil and Mat Doherty as inverted wing-backs, a bizarre situation that saw them cut inside and swing hopeful crosses in. Once the Italian has this area sorted, Spurs will be a real force.

The quality of defending on show in the Watford and Norwich City matches was abysmal. Seven goals conceded between them, and in both games it was a case of total disorganisation; missing runs, failing to track, and leaving huge patches of grass open in the final third.

In Watford's case, it looks as though Claudio Ranieri just cannot get the players to listen to his instructions, because they do not appear to have changed at all since the Xisco era. He will surely be out of a job in the next month or so. Norwich, meanwhile, have doubled down on aesthetic possession football under Dean Smith and like his Aston Villa team they are far too porous in the transition.

Already it would appear there is no hope of survival for either club.