Thomas Tuchel had already beaten Antonio Conte's Tottenham Hotspur twice in January despite the Italian using different formations, a 3-4-3 and a 3-5-2. That Conte again switched system was a clear sign that Tuchel has got in his head. Conte deployed a back four for the first time since 2016, an extraordinary shift in strategy made all the more bizarre by the ultra-defensive team selection.

Tottenham lined up in a flat 4-4-2 with full-backs Ryan Sessegnon and Matt Doherty in the wide midfield positions, and while Spurs didn't go full Jose Mourinho (these two didn't drop to make a flat six, for example) it was a highly conservative system. As a direct result, Conte's side just could not counter-attack effectively from within such a low block and with so few creative players on the pitch. Stephen Bergwijn and Harry Kane dribbling through the middle was their only vague hope.

Once Chelsea took the lead, there was no way back. Conte had been foiled again, and while it was a tactical failure first and foremost the Spurs manager also showed just how badly he needs reinforcements. The visitors had very few options and never looked like scoring.

As for Chelsea, this was another confident win against their rivals and with another new formation. Throughout their difficult winter run it had become clear that Tuchel's 3-4-3 was becoming stale and it is to the manager's credit he has made significant alterations this month, first introducing a hybrid 4-2-2-2/3-5-2 for the two EFL Cup wins against Tottenham before moving to a more conventional 4-3-3 for Sunday's game.

The most noteworthy aspect, aside from a basic cautiousness throughout the contest as the full-backs stayed deep, was how Mason Mount and Hakim Ziyech looked more comfortable. Mount, along with Matteo Kovacic, operated as a free eight and tended to move out towards the flank, weaving the play together in the half-space and regularly making runs that Tottenham's two-man midfield could not successfully track. As for Ziyech, he simply looked more at home in a traditional right wing role – a position that doesn't really exist in Tuchel's 3-4-3.

It is great news for Chelsea fans that the team took to the system so fluidly, showing that with time Tuchel will get multiple systems banked at Stamford Bridge, allowing his team to adapt to different challenges. They have a huge variety of players in a brilliant squad, and a tactically intelligent manager to make sure that advantage is maximised; by next season Chelsea will be in a much stornger position to battle for the title. 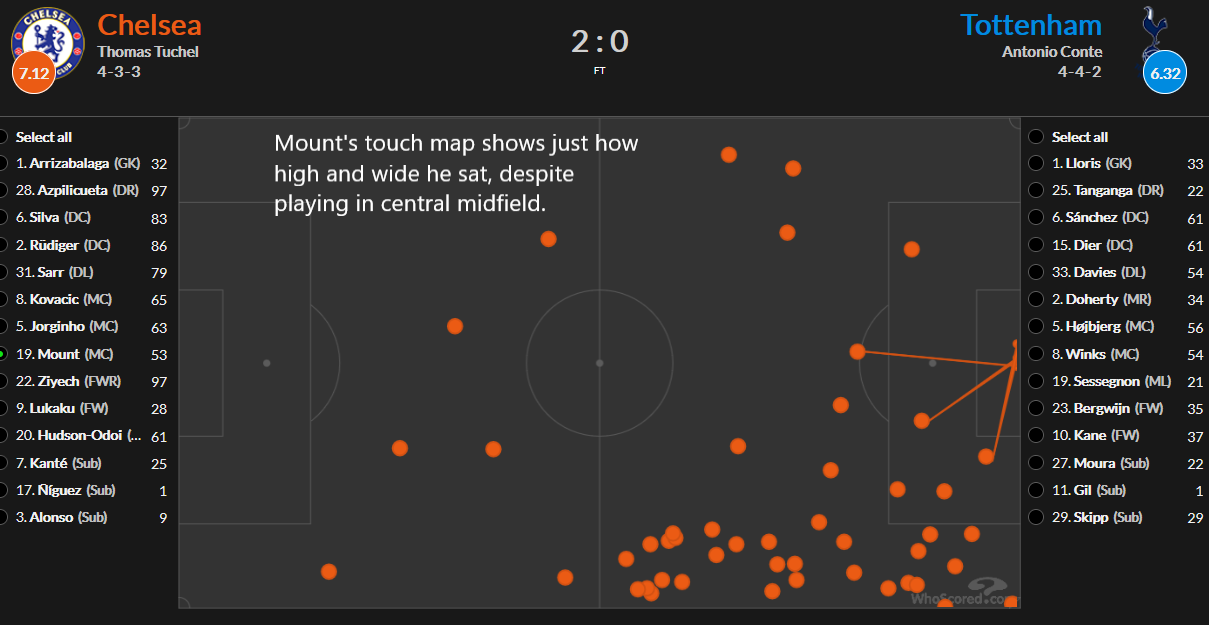 Ralph Hasenhuttl took points from Manchester City for the second time this season and it came as no surprise that he used the same system as in the 0-0 draw in September. He used a 4-2-2-2 formation to sit off the Man City defenders and surround Rodri at the base of midfield, keeping narrow and compact to force the visitors into stale sideways possession as they funnelled the ball harmlessly out wide.

This is exactly the sort of game in which Man City could do with a striker; with someone to make intelligent runs in behind and turn half-chances into goals. Jack Grealish did not work as a false nine because he came short too often, making the task easy for that hunched Southampton defence.

The result was proof that Man City are not as invincible as they might seem. They can look jaded in games and, having been fortunate to win narrowly in matches against Aston Villa and Wolves recently, we saw that there will be more occasions this season in which the Premier League's middle-class can slow Pep Guardiola's team right down. There is still a slim chance that Liverpool can challenge for the title.

Duncan Ferguson used exactly the same tactics as in his brief caretaker spell in 2019, and it was perhaps only bad luck that he did not get a simiarly explosive start to the 3-1 win over Chelsea two years ago. The main difference was that while Frank Lampard's side were very open and naïve, vulnerable to blood-and-thunder football, Aston Villa are an aggressive side under Steven Gerrard and could withstand the onslaught.

Everton played in an old-fashioned 4-4-2, with Richarlison and Dominic Calvert-Lewin acting as two target men up front; a pair of Duncan Ferguson's to get on the end of long balls forward or cause enough hassle for the ball to bounce hazardously in front of the Villa penalty area. It was a real blast from the past to see so many punts upfield, and so many attempts to win the first header and spread the play to a quick winger. Villa began to panic in the second half and were fortunate to holf on.

But it isn't much of a tactic for the long-term, however. It is too simple for the modern game and would be quickly found out after the new-manager bounce wore off. Though fun to watch, Everton fans should be grateful that Ferguson is unlikely to be given the job on a permanent basis now. 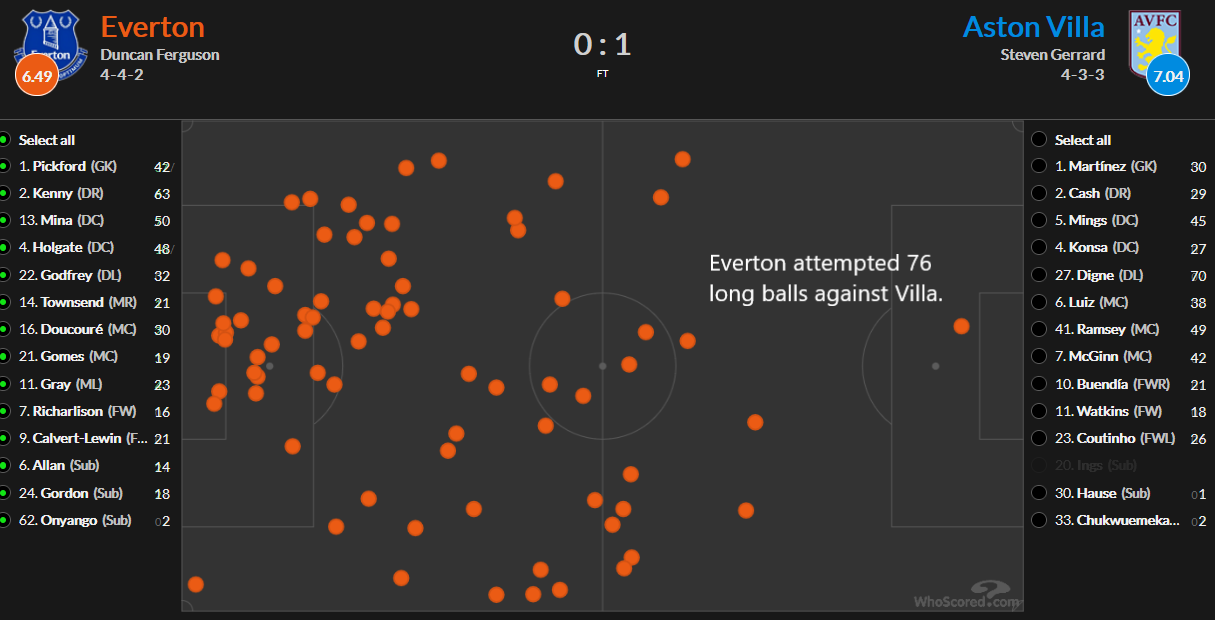 Arsenal had a very depleted squad for this match and that will surely be Mikel Arteta's main excuse for such sluggish and uninspiring football. Sean Dyche's Burnley played in their usual style, sitting very deep and banking on Arsenal being unable to break down a crowd of bodies around the penalty area. It worked a treat, mainly because Arsenal had no real plan for what to do after they worked the ball out wide.

They attempted 34 crosses, with only three finding an Arsenal shirt. It should have been obvious that throwing crosses into the box against this Burnley team was a bad idea, but the Gunners quickly ran out of ideas and played into the visitors' hands. Hesitating on the ball and then hurling one high into the danger zone is exactly what Burnley want you to do.

Arteta's long list of absentees was made clear by the fact he only used one substitute. He needs reinforcements this month if Arsenal are to maintain their challenge for a top-four place.