Here's five key lessons we learned from the second round of season 2021/22:

Both of Chelsea's goals in a 2-0 victory over Arsenal were scored via Reece James's movement from right wing-back and the hosts' inability to track the sheer dynamism of Thomas Tuchel's forwards. Rob Holding and Pablo Mari appeared to be tasked with going essentially man-to-man with Kai Havertz and Romelu Lukaku respectively while Granit Xhaka was meant to drop to form a back three by sticking tight to Mason Mount, but this individualistic approach could not keep up with Chelsea's intelligent positional rotation.

After the three-on-three marking initially worked well, leaving Kieran Tierney to track James, things began to unravel when Xhaka failed to drop. He was distracted, and drawn into a typical midfield battle by the work of Jorginho and Matteo Kovacic – neither of whom were blocked by Emile Smith Rowe. This forced Tierney infield to track Mount (left free by Xhaka) and led directly to an overload on that side of the field. James twice was free, to assist then score, because of this configuration of bodies, as shown below: 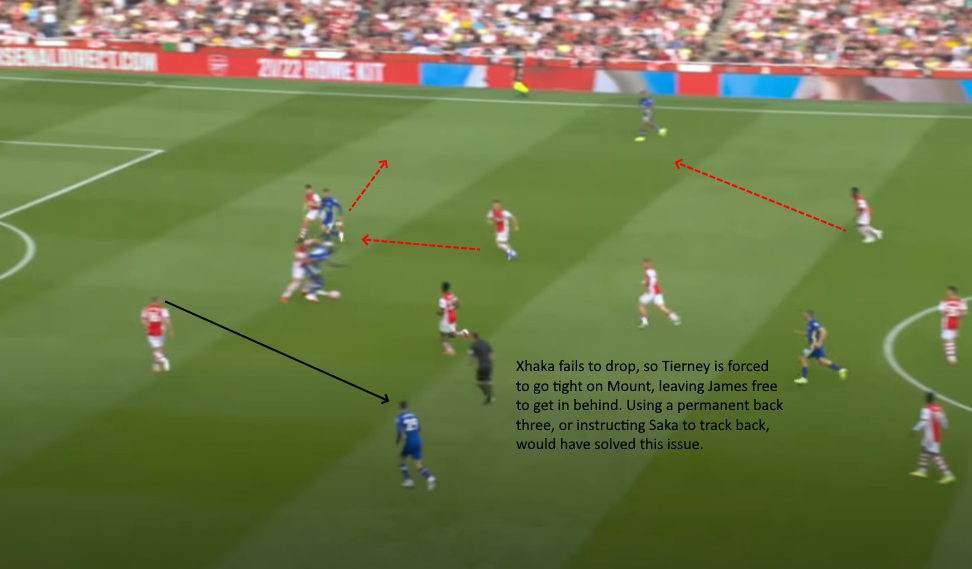 Mikel Arteta ought to have instructed Bukayo Saka to stay deep and help keep an eye on James, or better still could simply have used a 3-4-3 formation. That is almost always the best way to deal with Tuchel's system, because by mirroring the shape the roles are simplified – and players can be tracked even when moving around as much as Chelsea's forwards. What's more, Arsenal's 4-2-3-1 – with Xhaka closely watching Mount – left far too much space in midfield for Albert Lokonga to cover, meaning the forward pass into Lukaku's feet was rarely blocked.

Arteta got his tactics completely wrong here, and frankly he should have known better. Tuchel has been using this system for quite some time; both goals were predictable and avoidable.

David Moyes has a knack for getting the small details right and here was yet another example of his tactical intelligence. In the first game of the season he started Pablo Fornals on the left and Said Benrahma in the number ten role, which gave his team greater playmaking ability through the centre of the pitch, but he switched these two around in the 4-1 victory over Leicester City.

Fornals was the man to engage in the high press from a central position, leading directly to the second goal as Caglar Soyuncu sloppily conceded possession, while Fornals and Benrahma combined superbly on the counter-attack for the opener. Benrahma's pace was well suited for a performance that began largely on the break as Leicester's attacking full-backs got caught out by the hosts.

It was typical Moyes, who continues to defy expectations by deploying the perfect setup for a given encounter. Elsewhere, Michail Antonio was exceptional as a creative striker and Declan Rice once again dominated by intercepting the play and pushing the ball cleverly back forward. With Fornals dropping deep to give Rice the pass and Benrahma creating the width on the left, West Ham had a simple strategy to work through a wobbling Leicester team.

Ole Gunnar Solskjaer appears to have got a lot of the big decisions wrong on Sunday. Against a very compact Southampton side that is willing to both put men behind the ball and snap into a hard press when the opportunities arise, this was always going to be a bigger test of Manchester United's progress than the win over Leeds United. Unfortunately, a lacklustre central midfield and a mistake in the forward line-up cost the visitors two points.

Fred and Nemanja Matic struggled on and off the ball. Their general inability to play decisive forward passes makes them a timid midfield partnership and allowed Southampton to remain narrowly compressed in their shape, in turn piling extra pressure on United's more creative players. It is a problem that has overshadowed Solskjaer's progress for quite some time.

Off the ball Fred is too passive in the tackle and does not cope well under pressure, hence Southampton's pressing leading directly to the first goal: 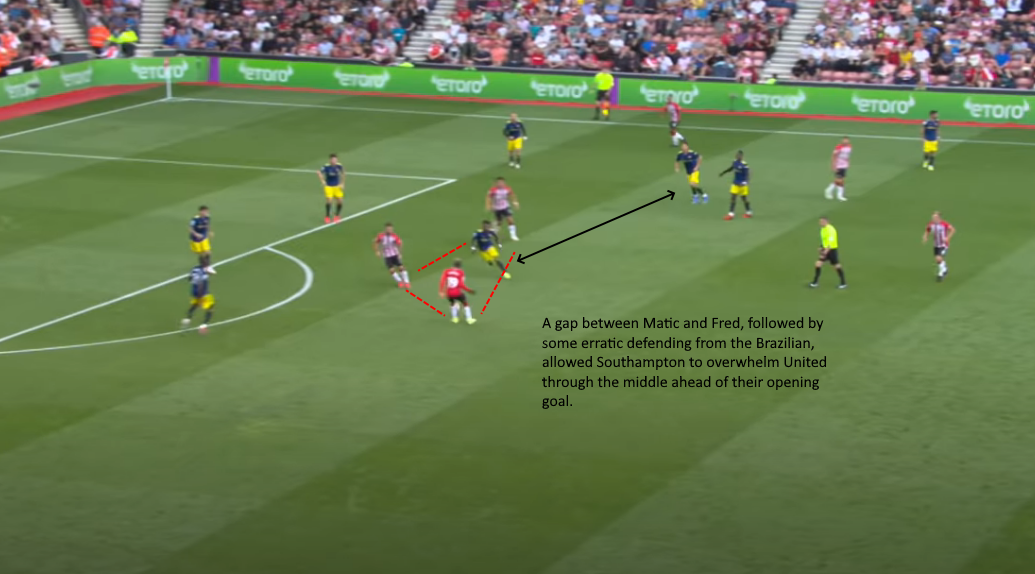 Up front, United may have been able to overcome this problem had Solskjaer started Sancho on the right and Mason Greenwood up front. Sancho was signed specifically for games like this one, where direct dribbling can pierce a compact defence and pull opponents out of position, while Greenwood was much more effective than Anthony Martial once Solskjaer moved the teenager into the number nine position.

This was supposed to be a more robust and streetwise Norwich City, but Daniel Farke's side look just as disorganised at the back as they did in 2019/20. Manchester City at the Etihad is always going to end in defeat, of course, and yet the of Norwich's defending was seriously alarming; Farke's side neither pressed onto Man City to deny them time on the ball nor sit deep to frustrate them in the penalty area.

Instead, they hovered in between – doing neither one thing nor the other – and that's why Man City's midfielders easily found time to play a through ball and why the pass to an on-runner (usually Gabriel Jesus) was so consistently successful. Farke's side essentially conceded the same goal four times, with Jesus making a run between centre-back and full-back because that gap was too big and there was nobody putting pressure on the ball: 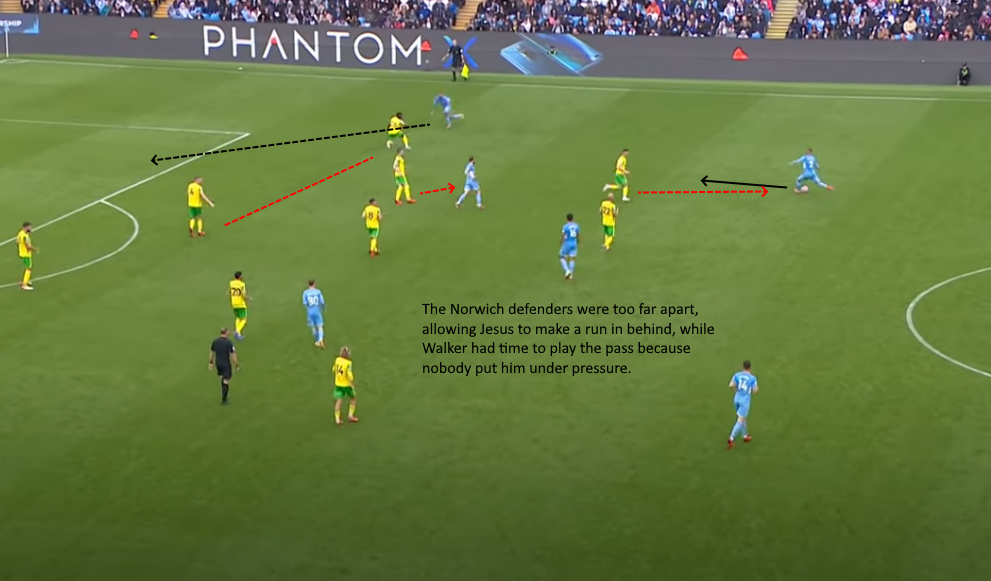 As for City, Pep Guardiola will be delighted with the contribution of Jesus from an unexpected right wing position that proved – along with Jack Grealish moving out to the left – that Man City have a huge amount of tactical variety in their front line.

A lot has been made of Liverpool's lack of transfer activity this summer and yet their 100% start to the 2021/22 Premier League campaign suggests Jurgen Klopp's squad is as refreshed as anyone's. That is partly because of the return of Virgil van Dijk from injury, which has instantly solidified the defence and given Liverpool a platform upon which to build, and partly because Diogo Jota, Naby Keita, and Harvey Elliot all look like new signings.

Elliot was particularly impressive from the right side of midfield, his graceful touches and clever passes through the lines reminiscent of how Philippe Coutinho used to create changes as a free eight in Klopp's 4-3-3. The youngster looks more than ready for an impactful season, as does Keita – the natural successor to the energy provided by the departed Georginio Wijnaldum. If he can finally discover the form he showed at RB Leipzig then Liverpool's midfield will be greatly improved.

Finally, Jota's goalscoring touch makes him a useful alternative to Roberto Firmino in the number nine role. Liverpool have become a lot less predictable now they have four players to fill those three forward positions. Burnley were pulled too narrow by their interplay – allowing Trent Alexander-Arnold to flourish on the overlap.