Arsenal and Chelsea both pulled off important victories, while Said Benrahma's performance enabled West Ham to keep their top-four chances alive. Here are five tactical lessons we noticed from the weekend games...

After an awkward 2-1 win over Southampton, in which Tottenham were as hunched and passive as during the final days of Jose Mourinho, and then a disappointing performance in the League Cup final, here was the first example of what Ryan Mason wants to do at Spurs. In short, their 4-0 win over Sheffield United looked a lot like a Mauricio Pochettino performance.

Spurs dominated possession throughout, but also made sure not to let it become stale. Pochettino, whom Mason played under, always wanted the ball moving forward, and in that style Mason had instructed Toby Alderweireld to play lots of long cross-field passes to get into the final third. Spurs played with verticality and forward-thinking intent, as well as with very high full-backs who provided all of the width.

With the full-backs wide, that allowed Spurs' creative midfielders and forwards to crowd the central column of the pitch, making runs off Harry Kane as he dropped to receive the ball; Dele Alli in particular could be seen making those movements beyond the striker. In all of the above, it was classic Pochettino Spurs.

Gareth Bale's hat-trick was testament to the psychological shift that takes place when the manager adopts attacking football. The players get a lift in confidence and, emboldened by their manager's progressive attitude, start to play with swagger. It is clearly the way forward for Mason – and for Mourinho's long-term successor.

2) Directness of Werner & Havertz take Chelsea to next level

Over the last few weeks Thomas Tuchel has begun the process of introducing more daring and high-demand attacking moves at Chelsea, following on from his successful implementation of ruthlessly structured possession football. Not that the foundation has been laid down, Tuchel is moving into the more difficult area of verticality, counter-pressing, and quick balls in behind the opponent.

The 2-0 win over Fulham was one of the best examples of this, with the much-improved Timo Werner and Kai Havertz taking centre stage. Werner's runs are drawing defenders away from the centre, creating room for Mason Mount, but they also give Chelsea a more direct pass. Fulham were forced into a clumsy shape by the speed of Chelsea's forward distribution, with long balls leading to both goals.

For the first goal Thiago Silva punted the ball forward from the edge of his own box to find three Chelsea runners, and within four touches – two from Mount, two from Havertz – the ball was in the back of the net. The brilliant one-two between Werner and Havertz for the second goal also came from a long ball forward that caught Fulham out, following a pattern throughout the game of setting Werner in behind from deep in the Chelsea half.

It was the perfect tactical system to avoid being stuck in front of a deep-lying Fulham shell, which would have led to aimless passing of the ball from side to side.

Mikel Arteta's Arsenal are difficult to understand, their attacking patterns a little too chaotic as individuals like Bukayo Saka and Dani Ceballos attempt to overcome the sluggishness with bursting dribbles. It often feels as though Arsenal's players are battling against the cautious shape their manager is building, creating a tension that leads to stilted and oddly fractured football.

There is hope, however, of a more ordered future if they can sign Martin Odegaard on a permanent deal. He was superb in the 2-0 win over Newcastle on Sunday, and while it was admittedly weak opposition (Steve Bruce's 5-3-2, with Miguel Almiron as one of the midfielders, leaves them very light on numbers in central areas) it was further evidence of his immense talent.

Odegaard completed five key passes and achieved a 90% pass accuracy, reflecting his calm control and creative influence from the number ten role. Among the chaos, he brought order. 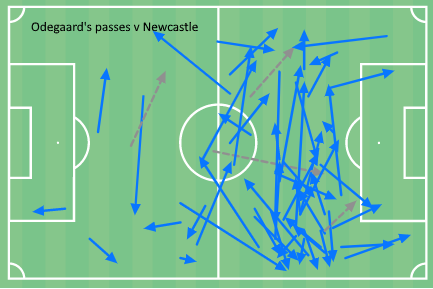 West Ham United had started to wane recently, and just as Jesse Lingard kept the club's momentum going after January it was clear David Moyes needed one more player to step up; one more surge to take them over the line. Judging by the 2-1 win at Burnley, Said Benrahma can be that man.

He completely dominated the game in the opening half, moving sharply across from the left wing into central areas to relieve some of the creative burden from Lingard, and the Burnley defenders could not cope with his directness. Benrahma's skill in the one-on-one forced the hosts into uncomfortable positions, while his brilliant cross in the 29th minute assisted the eventual winner.

Michail Antonio's double was a sign that his injury has not slowed him down, leaving Moyes with his goalscorer in full swing just as Benrahma adds firepower. It is an exciting prospect ahead of a relatively kind run-in. Chelsea's top-four place is far from secure.

5) Bissouma is ready to move to a super club

Yves Bissouma is arguably the best player of his type in the Premier League, bar N'Golo Kante. The Brighton midfielder is an immaculate tackler and interceptor with a first touch and daring box-to-box mentality that helps Brighton evade the press and weave up the field. He is, in short, the complete package, and more than ready to play for one of the top clubs in Europe.

His performance in Brighton's 2-0 victory over Leeds United defined the contest. Bissouma's strength under pressure and ability to slalom out of danger with the ball at his feet was the main reason Brighton could build through Leeds despite their hard-pressing. Marcelo Bielsa's man-to-man system fell apart because of Bissouma's intelligence and sharp turning as the midfielder topped the charts for dribbles (three), tackles (three), and interceptions (three).

Manchester United should be looking at Bissouma to replace Fred, while Manchester City may also see him as a long-term replacement for Fernandinho.