Tottenham Hotspur did well to fight their way back into the contest in the second half but they could easily have been four or five goals down at half-time, and ultimately the greater urgency and desire they showed after the break cannot cover up glaring tactical flaws. Antonio Conte made a bizarre and unforced mistake here that allowed Arsenal to dominate.

His 3-4-3 is always at risk of being overrun in midfield and that is especially true when facing a possession-centric side like Mikel Arteta's but to make matters worse Conte set his wingers too wide and fielded Pierre-Emile Hojbjerg alongside the inexperienced Papa Sarr. Sarr showed his naivety with some big positional errors, most notably rushing out to meet Thomas Partey in a moment that gave Bukayo Saka and Martin Odegaard the space to score the second goal.

Oleksandar Zinchenko spent the first half sat in central midfield alongside Partey, and together these two completely dictated the game, easily shunting the ball out to the right for Saka to terrorise Ryan Sessegnon. With Sarr and Hojbjerg occupied by Odegaard and Granit Xhaka, Spurs just could not deal with having a four-on-two against them in central midfield. Conte should take all of the blame for that catastrophic first half. 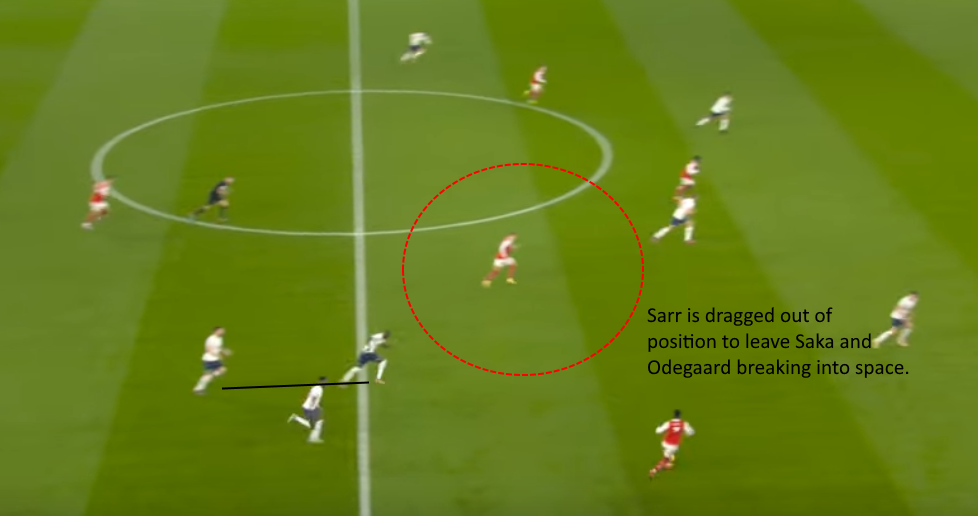 The key to Manchester United's 2-1 victory was Erik ten Hag's appreciation of the fact that you cannot try to beat Manchester City at their own game. Not for the first time this season, Ten Hag happily abandoned his possession and pressing philosophy to sit United in a deep 4-5-1 and absorb pressure before counter-attacking behind Pep Guardiola's high line, with Bruno Fernandes repeatedly releasing Marcus Rashford.

Those spring-loaded counters led to both of their goals, although the more impressive part of Ten Hag's strategy was keeping a lid on the Man City midfield. He added a third central midfielder, Fred, and instructed all three of them to man-mark their counterparts out of the game. Fred stuck to Kevin de Bruyne, Casemiro to Bernardo Silva, and Christian Eriksen followed Rodri around.

It slowed City down and even forced Erling Haaland to drop very deep in order to give the centre-backs – left alone by the hosts – a forward pass. It took a strange offside call to turn the game around, and City found a way to gain control for large chunks of the second half (see below), but overall United deserved their win for their humble and effective strategy.

As for City, the flaw was obvious as soon as the team sheet came out: playing Silva and de Bruyne as free eights inevitably left Rodri with too much to do to screen against the counters. Guardiola should have known that he needed a double pivot in this game, either by playing Ilkay Gundogan alongside Rodri or instructing a full-back to dip into the middle, because without one Fernandes and the quick United forward line was always going to be able to break.

It wasn't the only odd thing about Guardiola's tactics. He played with traditional full-backs, instructing Joao Cancelo and Kyle Walker to overlap, which meant City just didn't have enough triangle passing options through the middle of the pitch to break through United's stubborn resistance.

However, Guardiola did make notable changes for the second half. He moved Cancelo infield and told De Bruyne to sit out on the right flank, pulling him too far over for Fred to follow and therefore creating space for the Belgian – as we saw for City's opener, assisted by a De Bruyne cross from the right. Finally Man City were moving more freely and United's man-to-man system began to look too rigid, only for a stunning few minutes to see Man Utd's first-half counter-attacking threat return.

In a desperate bid to stop the decline Jurgen Klopp has resorted to increasingly strange tactics, albeit while refusing to let go of the very principles that are undermining his every move. The high pressing and high defensive line is non-negotiable even though Liverpool just don't have the legs in central midfield to enact it, hence Brighton's countless quick transitions at the Amex in a 3-0 win that could easily have been more.

Klopp selected a diamond 4-4-2 with Alex Oxlade-Chamberlain starting behind Mohamed Salah and Cody Gakpo, but the attempted fix only caused more trouble. Roberto de Zerbi's side are sensational when they break at speed and, facing such a narrow Liverpool system, flew down the flanks without a Liverpool player anywhere near them.

It was remarkable how many times Solly March, who scored or assisted all three goals, found himself alone on the right flank. It was no surprise, what with Andrew Robertson hurtling forward and the left-sided midfielder Thiago lacking the pace or movement to shut down these counters before it was too late. Until Klopp gets a new midfielder, we will see plenty more games like this one. 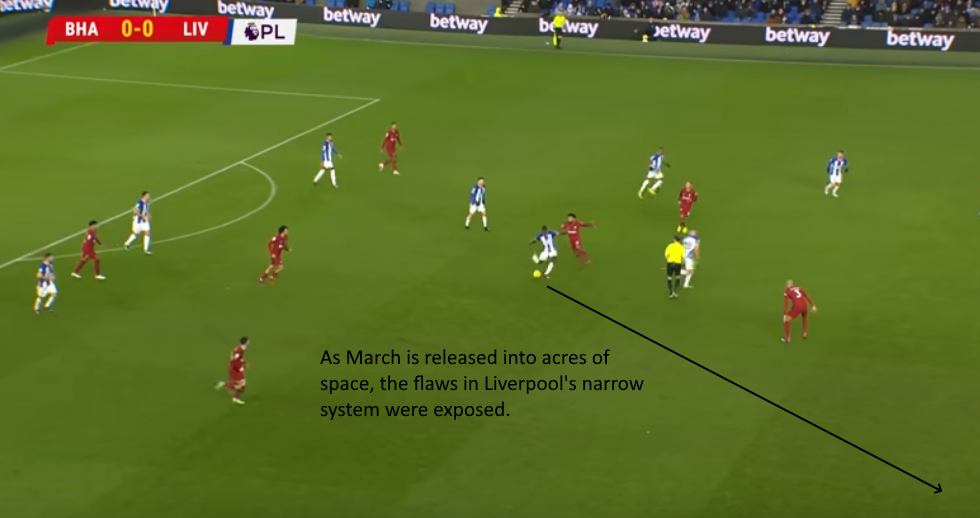 Here was yet another Aston Villa match under Unai Emery in which the new manager began with the wrong tactics but corrected them very proactively to give his team the win. The hosts began in a flat 4-4-2 with wide midfielders Jacob Ramsey and Emiliano Buendia struggling to understand their roles when Villa had the ball, leading to Villa's passing becoming a little stuck once it reached the full-backs.

Villa became trapped in their own half and an energetic Leeds United put them under significant first-half pressure. Spotting the problem, Emery moved to a diamond 4-4-2 with Leon Bailey and substitute Danny Ings operating as split strikers and Buendia sitting just in front of a three-man midfield. This suddenly gave Villa a progressive out-ball in Buendia; outnumbered the Leeds midfield, leading to more successful press evasion; gave Bailey the space he needed; and brought a confused Ramsey into the game.

With one move Emery solved all of the problems, and soon enough Leeds looked tired and a little lost, becoming vulnerable to the sudden tempo changes – and four-pronged counter-attacks – that are a hallmark of Emery football.