Arsenal faltered yet again at home against relegation threatened Fulham, while a late equaliser denied Liverpool a crucial win in their top-four push. Here are five tactical lessons we noticed from the weekend games...

Mikel Arteta took a novel approach to the Fulham game on Sunday. His Arsenal team were unusually focused on attacking down the wings, all-but emptying central midfield by instructing Dani Ceballos to move far out to the left wing and Emile Smith Rowe far out to the right, leaving just Mohamed Elneny in the middle.

It was odd, to say the least, and meant Fulham found it rather easy to sit tight and limit Arsenal's creativity. The hosts had very few options to progress the ball through the pitch, instead relying on passes into these crowded wide spaces – where they were forced to play in tight areas with 180 degrees of the pitch entirely close off to them.

Perhaps Arteta saw Fulham's 3-4-2-1 against Wolves, and the influence of Nuno Espirito Santo's wide men in that game, as inspiration. Whatever the reason, it really didn't work: Smith Rowe was limited by having to collect the ball in harmless wide positions, and Arsenal only ever looked dangerous when Bukayo Saka dribbled on the ball from the right wing into this emptied centre. Of course, from here, Saka had nowhere to go and nobody to pass to. 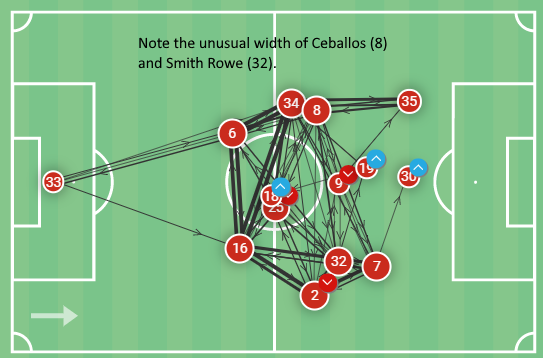 2) Southampton's midfield too porous to cope with Tielemans

The second FA Cup semi-final was just the latest example of the inherent flaw in Ralph Hasenhuttl's tactics. His 4-4-2 requires collective hard pressing to such an aggressive extent that the smallest of issues – just one player timing their press wrong – sees the whole pack of cards tumble. His 4-4-2 is inherently porous because there are only two central midfielders and the wingers are in the forward line, meaning perfection is needed to prevent getting caught in the transition.

Leicester City easily dominated through Youri Tielemans, one of the league's very best players at cutting vertical passes through midfields. Brendan Rodgers' side found it fairly easy to outmanoeuvre Southampton's press (just as they did to more devastating effect in last season's 9-0) and then break with simplicity through the team.

Hasenhuttl is a very good coach, but he needs to develop a second way of playing. Teams like Leicester are far too savvy to lose the ball in their own half, making Southampton's gegenpressing unsuitable.

Throughout his time as Man City manager Pep Guardiola has been vulnerable, in the biggest games, to long balls that are played quickly in behind his high defensive line. Whenever teams are able to break quickly into these spaces City collapse, and while Chelsea only won 1-0 on Saturday, Thomas Tuchel's side tore through Man City on numerous occasions this way.

Their main method of doing so was via Ben Chilwell's runs from left wing-back, helped by the movement and intelligence of Mason Mount. Mount, either coming infield to drag the right-back away from Chilwell or making runs in behind himself, was able to pin both Ruben Dias and Joao Cancelo. Since Ferran Torres was largely unwilling to help out, this gave Chilwell acres of space on that side to get on the ball and cause danger.

There were warning signs throughout the first half before it ultimately led to the winner in the second. Mount, for the umpteenth time, dropped into the left-hand space to pick up the ball, catching Cancelo in no-mans-land and playing a through ball for Timo Werner – who got in behind and squared for Hakim Ziyech to score. 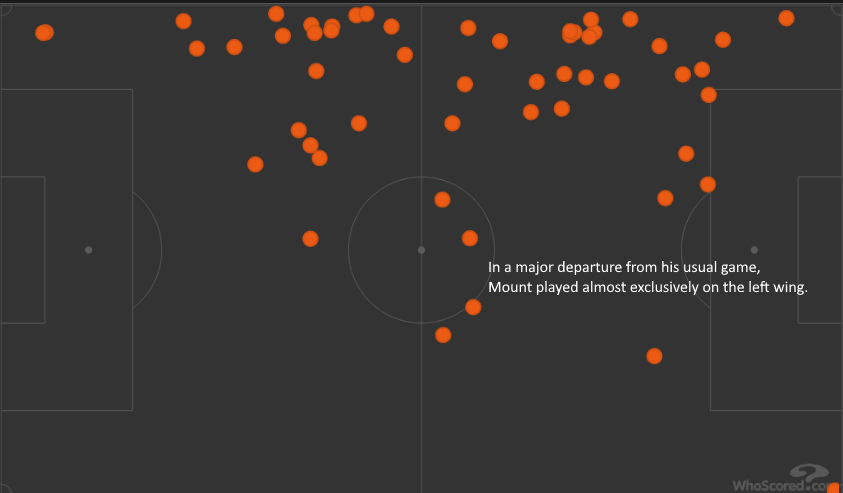 Liverpool's first 45 minutes against Leeds United on Monday night was a master-class in how to approach Marcelo Bielsa's man-to-man marking system. Leeds famously follow players around in open play, sticking tight to individuals in order to snatch the ball away rather than hold their ground and mark the space – an approach that usually catches teams off guard.

But Jurgen Klopp knew what to do. Liverpool essentially treated open play like a corner, making runs and counter-runs, feigning to go one way then whipping around the other, and it left the Leeds players scurrying frantically about the pitch. It only takes three or four Liverpool players doing this simultaneously for Leeds' lines to fall apart, leading directly to the opening goal and several more high-quality chances.

However, Leeds' secret weapon is their fitness, and as Liverpool tired in the second half Bielsa's side were able to work their way into the game and push the visitors back.

Manchester United once again struggled to build their attacks with any real fluency for long periods of this match before finally coming to life in the second half. That is a familiar pattern for Ole Gunnar Solskjaer's side, and while the underlying cause is a lack of detailed coaching of United's attacking lines it is also caused by the flatness of their central midfield.

Fred and Scott McTominay both lack the ability to break the lines, either in possession or with clever forward passes, and as relatively flat-footed players they each tend to take the simple option of a sideways pass. This leads to stale football from Man Utd, and it is the main reason why Edinson Cavani - a second half substitute against Burnley - has become so important to the team.

Unlike any other United forward, Cavani is excellent at dropping off the front line into space, giving Fred and McTominay an unavoidably easy forward passing option. From here, the Uruguay international plays a neat ball round the corner to Bruno Fernandes or one of the wingers and all of a sudden United are running at pace into the final third.

United's opener was an indirect result of Cavani's movement into deep central midfield positions. As the image below shows, he drew Burnley defenders towards him, in turn creating space for Marcus Rashford that had not appeared in the opening 45.