Thomas Tuchel saw his Chelsea stumble at Southampton, while Everton outplayed Liverpool to win at Anfield for the first time this century.

Thomas Tuchel's first few games as Chelsea manager have been defined by the performances of his central midfielders and inside forwards within the 3-4-2-1; since there are few runners in behind and limited numbers on the flanks, if the opposition can stop Chelsea from dictating through the middle they become a little flat.

Despite the UK commentary team persistently claiming Southampton used three at the back, Ralph Hasenhuttl's side were actually in their usual 4-4-2 when off the ball, with the entire front six in an ultra, ultra narrow circle that ring-fenced Chelsea's midfield pair of Matteo Kovacic and N'Golo Kante. Like a murmuration of starlings, Saints swarmed inwards and then quickly swarmed out once the ball moved to the flanks.

This pretty much stumped Chelsea, who couldn't work out how to make use of any spaces opening up on the outside of that 4-2 circle, and with Southampton pressing bravely the visitors' rhythm was disrupted. The highly-structured Tuchel system looked like seven defenders plus three attackers. It was too stilted and everything was in front of the Southampton defence.

When in possession, Southampton switched from 4-4-2 to 3-4-2-1, with Takumi Minamino coming in off the left to become an inside forward behind Danny Ings as Ryan Bertrand left the back four. This hybrid system confused Chelsea and made Minamino's movement particularly difficult to track – hence his goal, a run in between flat-footed Chelsea centre-backs. 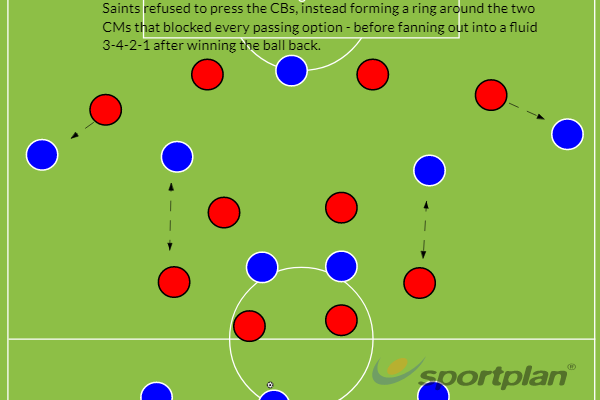 For long stretches of the game at Anfield it was difficult to work out whether Everton were playing in a 5-3-2 or a 4-4-2 formation during those periods of stale Liverpool possession. That was because Seamus Coleman's movement up and down the right flank switched the system up; when he moved into the midfield line the rest of the team shifted cleverly across to make it an evenly-spread 4-4-2, but if he dropped they all shuttled back.

What was really happening was a man-marking job. Coleman followed Andrew Robertson throughout, changing Everton's formation depending on whether Robertson was dropping deep to get crosses in or moving forward to overlap Sadio Mane. Similarly Mason Holgate was tracking Mane wherever he went, with the Everton pair safe in the knowledge that, with Mane and Robertson dove-tailing, they could afford to man mark without being pulled too far out of shape.

The same thing happened on the other flank, albeit infrequently given how often Liverpool preferred to attack down their left. Along with James Rodriguez and Richarlison performing as a pair up front, leading directly to the opener, Carlo Ancelotti's intelligent tactical tweak gave Everton the platform for their victory. 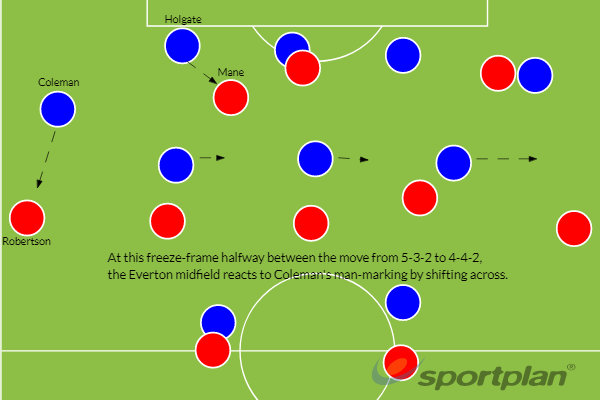 After a terribly flat first half from Tottenham - characterised by West Ham's ability to sit in and nullify, with individual Spurs players attempting to dribble all on their own, highlighting just how disconnected and disorganised they have become – Jose Mourinho introduced Gareth Bale at half-time and things started to unclog.

Bale picked up some excellent positions in between the West Ham defensive and midfield lines, dropping to receive the ball on the half-turn and drive Tottenham forward. He almost single-handedly dragged them back into the game with the sort of movement that had been badly missing in the first half, although ultimately Tottenham were still overly reliant on individualism. Nobody moves in sync at Spurs because Mourinho doesn't coach pre-set moves, which allows a deep blockade like West Ham's to defend easily.

After Bale began to change the game, David Moyes switched to a 5-4-1 with Ben Johnson brought on to help Aaron Cresswell nullify Bale. But oddly enough, a few minutes before that change Mourinho moved to a very attacking 3-2-4-1 that took Bale off that right flank and into an overly-congested midfield area. Bale's performance dipped and the match became too stretched, with West Ham almost catching Spurs again on the break.

Mourinho's wild attempts to up the tempo betrayed the lack of a sophisticated, preordained tactical plan, and while Bale's performance gives some hope for the future this was another Tottenham game that seemed to highlight just how behind the times Mourinho has fallen. 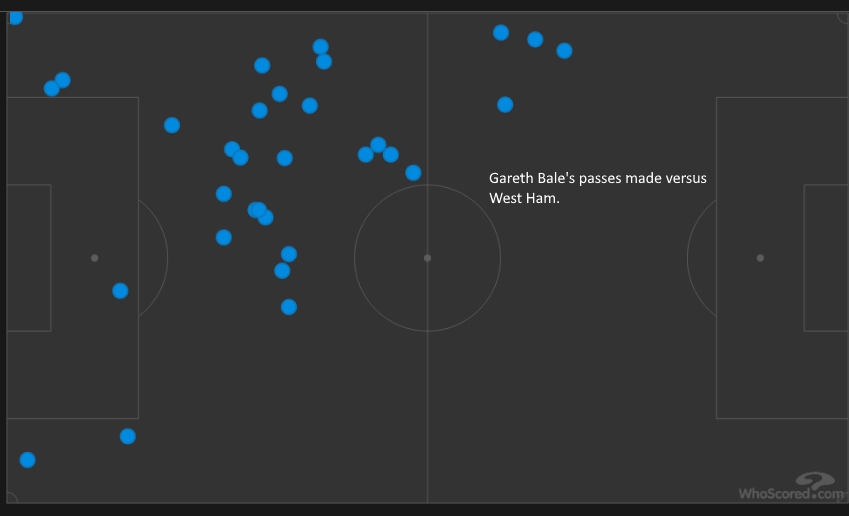 Understandably, most of the post-match discussion on Aston Villa's drab performance in a 2-1 defeat to Leicester City focused on the absence of Jack Grealish, but really there was a much bigger issue defining the outcome. Dean Smith often moves between a 4-2-3-1 and a 4-3-3 – despite the fact Villa are almost always too porous in the middle when the 4-3-3 is selected.

On Sunday, John McGinn was instructed to sit higher up the pitch alongside Ross Barkley, leaving Douglas Luiz alone at the base of a 4-3-3. It was a bizarre decision considering how Brendan Rodgers packs the number ten space with bodies and likes to play predominantly in this 'red zone'. Time and time again Luiz was over-worked as James Maddison and Harvey Barnes dominated this area.

Things improved for Villa once Jacob Ramsey and Morgan Sanson came on (part of the issue is poor individual performances in midfield, largely due to tiredness) but this was a tactical mistake from the manager first and foremost.

In a confusing post-match interview, Smith seemed to suggest he wanted to control their midfield by emptying it: "Our plan was to[…] go more with a one than a two in midfield. We tried to nullify where their strengths are with Maddison, Tielemans and N'didi." It was a very odd decision. 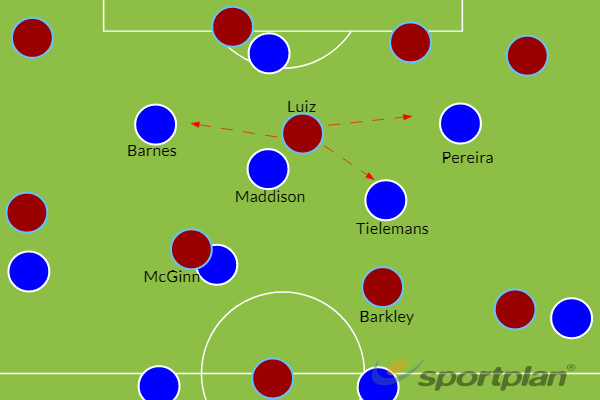 This was mostly a training exercise for Manchester City, who after taking an early lead were allowed to pass the ball around at half pace. Mikel Arteta's decision to sit deeper than usual and refuse to engage City until the final third was partly to blame, and as the game wore on Arsenal were unable to up the tempo and push for an equaliser thanks to that ever-flat Granit Xhaka / Mohamed Elneny partnership.

Arsenal are incapable of moving the ball quickly through the lines whenever these two player together, which helps explain why the life drained out of this match. But City's system also contributed to the lack of action. Pep Guardiola used the falsest of nines in Kevin de Bruyne, and consequently City had virtually nobody making runs in behind the Arsenal defence. Everything was in front of the hosts, creating a sluggish training match played almost entirely in the Arsenal half.