1) Brighton spurred on by crowd - and Potter's substitution

Brighton came back from 2-0 down to beat Manchester City on Tuesday in one of the surprise results of the season, and while the red card did play a huge role the crowd's presence was even bigger. The hosts pinned Man City back for long periods of the second half, a testament to the aggression and high-pressing approach of the manager, whose team was spurred on by a raucous home crowd.

That wouldn't have been enough without a clever tactical switch from the manager in the 49th minute, 60 seconds before the first Brighton goal that kick-started the revival. Graham Potter took off Alireza Jahanbakhsh and replaced him with Adam Lallana, moving from a 3-5-2 to a 3-4-2-1 formation. That extra player in midfield helped Brighton to build momentum centrally and make full use of their numerical advantage.

Lallana had a good game, controlling the tempo from the middle of the park as Fernandinho and Rodri found themselves totally outnumbered in City's 4-4-1-0. Brighton's swarm of bodies in the half-spaces allowed them to pin Man City back and grind them into submission. 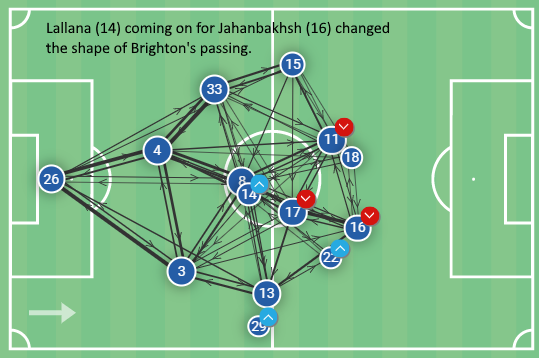 Leicester City deserved their FA Cup victory at the weekend after a very confident performance at Wembley, which makes it particularly strange that Brendan Rodgers abandoned the 3-4-1-2 for a 3-4-2-1 – dropping Kelechi Iheanacho to the bench for James Maddison. The theory was to help build through the midfield better while blocking Chelsea by mirroring their formation exactly – but it did not work out like that.

Instead, the excellent pressing we have seen from Leicester with tandem strikers was lost, leaving the increasingly slow Jamie Vardy all alone to harass the ball from the front. There was now only a one-man barrier to Chelsea's back three, which allowed Thomas Tuchel's defenders to build unchallenged out from the back. Antonio Rudiger was consequently dominant, powering out of the back line to get the hosts up the pitch.

Rodgers deserves credit for recognising the mistake and switching back to 3-4-1-2 in the second half, replacing Maddison for Iheanacho on the hour mark. It made a huge difference: Leicester held 34.5% possession in the first hour and 53.5% after that substitution, getting a foothold back in the game. They even scored by pressing high as a loose pass was intercepted and fed to Iheanacho for a consolation goal.

Jack Grealish enjoyed a very good first start since his injury, creating four chances and helping Aston Villa to completely control the game from an unusual number ten position. Ordinarily Grealish slows the game down too much to excel centrally, but his presence here – with Bertrand Traore and Anwar el Ghazi instinctively drifting towards him – helped to expose Tottenham's misfiring midfield.

Ryan Mason has not managed to find the right combination in the middle. This time, Harry Winks seemingly had no idea how to keep track of Grealish, ensuring Villa dominated the ball and pushed Spurs into their own third. Part of the problem is that with Dele Alli on the pitch Tottenham are playing in a two, and without detailed coaching these two are roaming listlessly, unsure of how to stop their opponents.

But it is also a case of picking the wrong players. Spurs lacked any progression through the middle without the technical ability of Giovani Lo Celso, while Mason's continued unwillingness to start Tanguy Ndombele is becoming a real problem. Tottenham need line-breaking midfielders who are comfortable being on the ball under pressure. 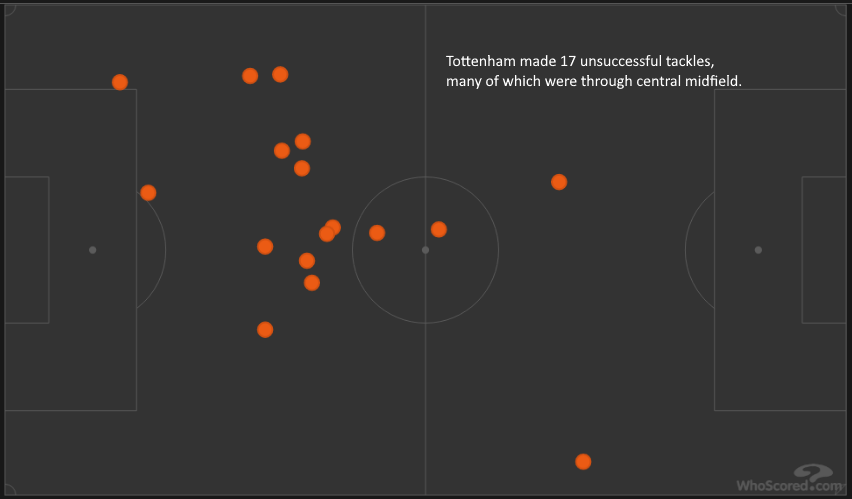 4) West Brom have struggled because Big Sam checked out

Watching Sam Allardyce on the West Brom bench over the last couple of months it is clear he has mentally checked out; arms folded and sat back in his chair, Allardyce has done everything he can to distance himself from the relegation that tarnishes his record.

It is a pretty disgraceful way to behave in all honesty, and the fact he just doesn't care – as was made obvious by his come-and-get-me plea to Sky Sports in the post-match press conference – has contributed to the Baggies' limp end to the season.

They were directionless against West Ham, playing in the free-form and confused manner of a team that wasn't sure what was expected of them. After initially taking the lead they became a little timid, not one thing nor the other, and then in the crucial final 30 minutes of the match they fell into West Ham's trap by holding possession and pushing up the pitch.

The Hammers counter-attacked to victory, and West Brom fans were left wondering why on earth Big Sam had taken the job in the first place.

For the second consecutive match Thiago was Liverpool's standout player. In the 2-1 win at West Brom last weekend the Spanish midfielder had the most touches (112), the joint-most key passes (five), the joint-most shots (four), and the most tackles (four). He had just as big an influence against Burnley in midweek, leading the way with 104 touches of the ball in a commanding, all-action performance.

Thiago has finally settled, and alongside Fabinho he can provide the basis for a Liverpool revival next season. His ability to disguise a vertical pass, cutting the ball into the forwards before the opponent can react, is unmatched in the Premier League, and recently he has managed to combine this with a sharper reading of the English game. Thiago now tackles and intercepts well, helping to pin the other team back and provide a solid foundation for Liverpool to get back to winning ways. 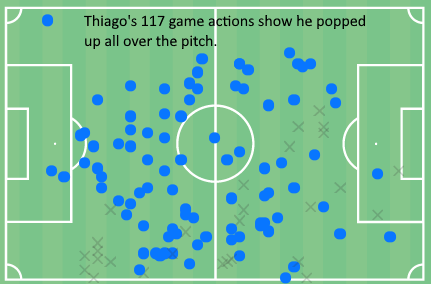